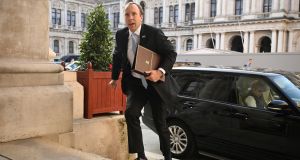 British health secretary Matt Hancock has hinted at a compromise to head off likely defeat by Tory rebels on Wednesday. Photograph: Leon Neal/Getty

Households in parts of the northeast of England will from Wednesday no longer be allowed to meet one another in any indoor setting, following a rise in coronavirus infections in the region. The restrictions, which apply to restaurants, bars and other public venues as well as homes, affect seven areas including Newcastle, Gateshead, Sunderland and Durham.

“Unfortunately the number of cases continues to rise sharply. The incident rate across the area is now over 100 cases per 100,000. We know that a large number of these infections are taking place in indoor settings outside the home,” health secretary Matt Hancock told the House of Commons.

“And so, at the request of the local councils with whom we’ve been working closely, we will introduce legal restrictions on indoor mixing between households in any setting. We do not take these steps lightly, but we must take them, and take them now, because we know that swift action is more likely to bring the virus under control.”

Mr Hancock was speaking during a debate about coronavirus which saw Conservative MPs criticise restrictions introduced in recent days and demand a say before further measures are imposed. MPs will vote on Wednesday on the renewal of powers given to the government six months ago and more than 50 Conservatives have publicly backed an amendment giving the Commons a vote on future restrictions.

Ministers met some of the rebel MPs on Monday and Mr Hancock hinted at a compromise to head off a likely defeat for the government on Wednesday.

“We are looking at further ways to ensure the house can be properly involved in the process, in advance where possible, and I hope to provide the house with further details soon,” he said.

The government on Monday introduced a raft of new restrictions and penalties, including fines ranging from £1,000 to £10,000 for failing to self-isolate and similar penalties for giving wrong information to a test-and-trace official.

This would target people who maliciously and falsely state that someone is a close contact of someone who tested positive for the virus as well as deliberately omitting to identify a friend who is a close contact in order to spare them 14 days of self-isolation.

Pubs, bars and restaurants which play loud music above 85 decibels or which allow singing or dancing will also face fines.

Former Brexit minister Steve Baker, who is among the Conservative rebels, suggested to Times Radio on Monday that Boris Johnson was being led astray by his advisers in Downing Street.

“People have got a great deal of faith in Boris Johnson. But I’ll push the boat out – many of us will have seen Lord of the Rings, and there is a scene in Lord of the Rings where Theoden the king is under the spell of his advisers. And he has to be woken up from that spell. When he wakes up from that spell, joy comes to pass in the kingdom. And I’m afraid, at the moment, somebody needs to wake Theoden from his slumber. And when Theoden awakes, and I mean Boris, everything will come right,” he said.