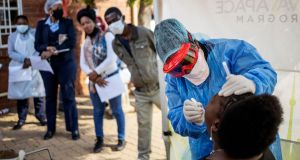 The World Health Organisation has announced plans to make 120 million cheap Covid-19 antigen tests available to lower- and middle-income countries as it seeks to limit the spread of coronavirus in the developing world.

The $5 test, which detects elements present on the outside of the virus rather than its genetic material, can confirm whether someone is infected with Covid-19 in as little as 15 minutes.

The alternative polymerase chain reaction (PCR) tests that look for viral genetic material directly require specialist laboratory equipment, which has led to severe bottlenecks in testing in many countries.

The antigen tests are made by SD Biosensor of South Korea and US group Abbott, which is one of the biggest diagnostics makers in the world. The WHO’s Global Fund has committed an initial $50 million to enable countries to purchase the new tests, with first orders expected this week.

“This will enable expansion of testing in hard-to-reach areas,” Tedros Adhanom, WHO director-general, said on Monday. They were “substantially cheaper than PCR tests and we expect the price to come down”, he added.

The WHO was reviewing another five antigen tests, said an official with the global health organisation. The WHO last week issued an emergency use listing for the SD Biosensor test, and is expected to do so for the Abbott kit in the next two weeks.

Lower agreed prices for poorer countries could push prices down across the board.

The Bill & Melinda Gates Foundation and the Foundation for Innovative New Diagnostics have been part of the deal for the tests that are being produced using a volume guarantee, with manufacturers making 20 per cent of their output available to poorer countries.

The management of the pandemic, which has killed nearly one million people globally, according to Johns Hopkins University, has been marred by delays and bottlenecks in testing. Reliable rapid tests could work to simplify the detection of positive cases and their isolation, along with that of their contacts.

Testing rates remain deeply divergent between countries as a function of their income. Africa, for example, has conducted fewer than 50 million tests in the continent as a whole since the start of the pandemic.

If lower- and middle-income countries were testing at the rate of their richer counterparts, the 120 million tests would be enough for only two weeks.

Reliable and quick testing is viewed by scientists as the cornerstone of any successful virus-management strategy. Isolating positive cases before they spread the disease, even if not symptomatic, further helps break chains of transmission. – Copyright The Financial Times Limited 2020