Tens of thousands of Indians have been holding demonstrations for the last two weeks, calling for the revocation of a new citizenship law, which critics say is anti-Muslim. Video: New Delhi, Reuters 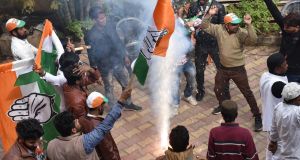 “The BJP will accept the people’s mandate,” outgoing BJP state chief minister Raghubir Das said after the coalition of the rival opposition Congress Party and the local Jharkhand Liberation Front (JMM) was leading in 46 of 81 assembly seats in vote-counting.

The winning party, or coalition, needs 41 seats to form the government.

The Jharkhand state assembly election result is politically significant, as voting took place amid nationwide protests by tens of thousands of demonstrators against the federal government’s controversial new citizenship law.

Nearly 21 protesters, including an eight-year-old boy, have died in clashes with police for demonstrating against the Citizenship Amendment Act, or CAA, that was enacted about 10 days ago.

Many of them have died of gunshot injuries, but police forces across the country claimed not to have fired at all, even though some television news channels claim to have footage to the contrary.

At least one student from Aligarh Muslim University, 160km south of New Delhi, had his right hand amputated allegedly due to severe police beatings, and doctors at the same hospital fear two other students may have to undergo limb amputation for similar reasons.

The protesters claim the CAA is discriminatory, as it offers citizenship to all non-Muslim illegal immigrants such as Hindus, Sikhs and Christians, among others, who fled to India from the Islamic states of Afghanistan, Bangladesh and Pakistan before 2015.

They also maintained that the Act abrogated India’s centuries-old secular and inclusive character as well as its constitution, which stipulates that religion is not a prerequisite for citizenship.

Though the Jharkhand state elections were fought largely on local issues such as tribal land rights, employment, agrarian distress and poverty-alleviation schemes, analysts said the CAA had largely triggered the BJP’s rout at the hustings.

Three of the five phases of voting in Jharkhand took place as anti-CAA protests erupted across India.

Mr Modi, however, steadfastly defended the CAA at a rally in New Delhi on Sunday in which he claimed the new law would help persecuted minorities in the three neighbouring Muslim states.

In a highly-charged 100-minute address, the prime minister accused the country’s opposition parties of spreading lies that the Act would snatch away people’s nationality rights. He also tried to assure India’s 200 million Muslims that in no way would the Act revoke their citizenship.

An unrepentant BJP is launching a countrywide “outreach” programme over the next 10 days to educate the public about the CAA and expose what it says are lies and myths being propagated about it by the opposition.

This will include senior BJP MPs and leaders holding 250 news conferences, some 1,000 rallies and interacting with some 30 million families to explain the efficacy of the new citizenship law.

Meanwhile, lawyers, students and human rights workers have said that the Act was part of the BJP’s Hindutva or Hindu nationalist agenda to create a theocracy and marginalise India’s Muslim population, which is the world’s second largest after Indonesia.

The BJP has also said it intends to follow up the CAA with a national register of citizens (NRC) to identify illegal citizens, which activists believe to be a euphemism for the country’s Muslims.

The NRC, which was recently published in northeastern Assam state, resulted in 1.9 million people – mostly Muslims – being rendered stateless, as they were unable to produce complex documentation and ancestry to prove their nationality from 1971.

A majority of India’s population of 1.3 billion, generally poor and illiterate, do not have any papers to back their citizenship claims.

Consequently, according to NRC regulations, they will all be confined to detention centres that are currently being built in Assam. Centres will also be built in the rest of India to house aliens.