Simmering tensions break out into open in Democratic debate

America Letter: Targeting of Pete Buttigieg underlines his status as the one to watch 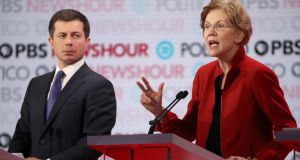 As Washington experienced one of the most dramatic weeks of the Trump presidency with Wednesday’s impeachment, another kind of drama was unfolding on the west coast.

On Thursday night candidates vying for the Democratic nomination for president took to the stage in Los Angeles for the party’s sixth debate.

Although 15 candidates are still in the running to become the nominee to take on Donald Trump in next year’s election, only seven candidates met the donor and funding thresholds needed to qualify.

Familiar faces like senator Cory Booker and Joaquin Castro were absent from the stage, as was Michael Bloomberg, who announced his candidacy last month – though the former New York mayor ran several ads during the debate, reminding viewers that he is the most deep-pocketed candidate.

Also gone from the field were heavy hitters like Kamala Harris and Beto O’Rourke, who bowed out in recent months.

The result was a smaller, more manageable line-up, but also a more homogenous one. Asian-American Andrew Yang was the only non-white candidate on stage, while only two women remain in the field – a problem for a party that believes it represents the increasing diversity of America.

The debate was a game of two halves. For the first hour, candidates politely gave their views on the impeachment of Donald Trump, climate change and trade policy. But halfway through the evening things got interesting. After weeks of simmering tension between Elizabeth Warren and Pete Buttigieg, who had made subtle jibes at each other via the media, the two candidates clashed.

“The mayor just recently had a fundraiser that was held in a wine cave full of crystals and served $900-a-bottle wine,” Warren declared, a reference to a recent Buttigieg fundraiser held at a California winery.

But Buttigieg shot back, pointing out that Warren had hosted high-dollar fundraisers when she was running for Senate, and was herself a millionaire. “Your net worth is 100 times mine,” he said.

“This is the problem with issuing purity tests you cannot pass yourself.”

Warren was not the only candidate to take aim at Buttigieg, the 37-year-old mayor from South Bend, Indiana, who has been steadily rising in the polls. Amy Klobuchar, the senator from Minnesota, challenged Buttigieg directly on his weak spot – his inexperience.

“When we were in the last debate, mayor, you basically mocked the 100 years of experience on the stage,” she said. “I think this experience works. And I have not denigrated your experience as a local official – I have been one. I just think you should respect our experience.”

Buttigieg responded by touting his experience in winning elections in a traditionally Republican state. “Try putting together a coalition to bring you back to office with 80 per cent of the vote as a gay dude in Mike Pence’s Indiana,” he said about his successful campaign to become mayor of South Bend, Indiana.

The attacks on Buttigieg underline his status as the one to watch at this point in the campaign. A military veteran and practising Christian, Buttigieg has positioned himself as a centrist alternative to Joe Biden and someone who can connect with Republican-leaning voters in the midwest.

Klobuchar in particular has taken umbrage at Buttigieg. She has publicly said that she believes a woman with Buttigieg’s credentials would struggle to run as successful a campaign, arguing that women are held to higher standards.

As a Minnesota native with years of experience in Congress she is appealing to some of the same ground as Buttigieg, but is behind him in the polls, particularly in the early voting states of Iowa and New Hampshire.

While Buttigieg took some knocks on Thursday, he came prepared and his assured responses are likely to please supporters. Nonetheless, criticisms on his age and experience may stick.

The Democratic race is one of the most fluid in recent memory. Polls show that most Democratic primary voters have not made up their mind on their candidate, and Bernie Sanders, who had been written off by some, has been performing well of late.

One person who remained in the background for much of Thursday’s debate was Joe Biden. But that may be a good thing for the former vice-president who had an uneven performance in previous debates.

Polling shows that Biden remains the front-runner. He may not attract the energy or attention of some of his competitors, but his consistent status at the top of the pack means he is not to be underestimated.