White House cabinet meeting: ‘We’re so politically correct, we’re afraid to do anything’

US president Donald Trump has said he plans to end a diversity lottery programme, also known as the green card lottery, which he said the suspect of killing eight people in New York City used to get into the US. Video: The White House 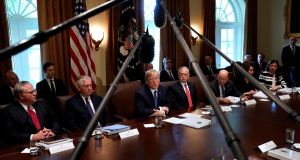 US president Donald Trump speaks during a cabinet meeting at the White House in Washington today. Photograph: Kevin Lamarque/Reuters

US president Donald Trump has given further reaction to what he called a “horrifying terrorist attack” in Manhattan on Tuesday.

The following is a partial transcript of Mr Trump’s remarks before his cabinet meeting today.

“Today we mourn the horrifying terrorist attack in New York City just blocks away from the site of the World Trade Center. The man drove a truck into a pedestrian bike path and murdered eight people and injured very, very seriously at least 11 more.

“All of America is praying and grieving for the families who lost their precious loved ones. Horrible act. Our hearts break for them and we pledge to renew our resolve in their memory.

“My administration is co-ordinating with... closely between federal and local officials to investigate the attack and to further investigate this ‘animal’ who did the attacking.

“I am today starting the process of terminating the diversity lottery programme [green card lottery]. I’m going to ask Congress to immediately initiate or get rid of this programme.

“We have a lot of good Bills in there that are being stopped by Democrats because they’re being obstructionists. And honestly they don’t want to do what’s right for our country. We need strength. We need resolve. We have to stop it.

“He came in through the diversity programme as you know and we’re going to stop it.

“Terrorists are constantly seeking to strike our nation and it will require the unflinching devotion to our law enforcement, homeland security and intelligence professionals to keep America safe.

“We will never waiver in the defence of our beloved country.” – White House Press Pool