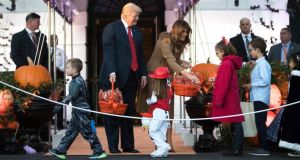 A defiant Donald Trump has hit out at the Mueller investigation into Russian interference in the US election, branding one of the three men charged with criminal offences a “liar” and insisting there had been “no collusion”.

In a series of tweets on Tuesday morning, the US president accused “fake news” of working overtime, after the first charges in the Russian investigation were launched. “As Paul Manaforts [sic] lawyer said, there was ‘no collusion’ and events mentioned took place long before he came to the campaign,” he said.

The president also branded former aide George Papadopoulos a “liar” and a “low level volunteer”. “Few people knew the young, low level volunteer named George, who has already proven to be a liar. Check the DEMS!” he wrote on Twitter.

His Twitter outbursts came a day after his former campaign chair Paul Manafort and business associate Rick Gates were charged with 12 federal crimes, including money laundering and conspiracy against the United States, during a court hearing in Washington DC.

Separately, it emerged that Mr Papadopoulos, a foreign-policy adviser to the Trump team during the presidential campaign, had pleaded guilty to misleading the FBI about the nature of his contacts with Russian individuals in an interview in January.

The Fake News is working overtime. As Paul Manaforts lawyer said, there was "no collusion" and events mentioned took place long before he...

....came to the campaign. Few people knew the young, low level volunteer named George, who has already proven to be a liar. Check the DEMS!

“I think that Papadopoulos is an example of actually someone doing the wrong thing while the president’s campaign did the right thing,” she said at Tuesday’s daily briefing. “All of his emails were voluntarily provided to the special counsel by the campaign and that is what led to the process and the place that we’re in right now with the campaign fully co-operating and helping with that.”

Ms Sanders also accused the media of being “obsessed” with the Mueller investigation, claiming there were “a lot of other things that people care a lot more about”.

As the White House strove to deflect media attention away from the Russia investigation, Mr Trump also described the resignation of Tony Podesta from his PR firm as “the biggest story yesterday”.

Mr Podesta, a brother of Hillary Clinton’s campaign manager John Podesta, and a well-known Washington lobbyist, announced he was stepping down from his firm, the Podesta Group, after it was revealed in the indictment papers served on Monday that the company had advised a lobby group in Ukraine.

The development has been seized upon by Republicans and Trump supporters as evidence of collusion between Democrats and Russia. Several senior Trump allies have also this week pointed to the sale of Uranium One, a Canadian company with US mine holdings, to Rosatom, a Russian state-owned company while Mrs Clinton was secretary of state. Uranium One investors donated to the Clinton Foundation.

He also repeated the White House’s assertion that the Mueller investigation “should wrap up soon”.

Monday’s dramatic events, which saw two former Trump officials charged with criminal offences while a third was revealed to have lied to the FBI about links with Russia, have prompted speculation across Washington that further indictments could be forthcoming.

Mr Manafort and Mr Gates, who both surrendered their passports to the FBI and have been placed under house arrest, are due to appear at the DC federal courthouse at 2pm on Thursday.