US president Donald Trump has said he plans to end a diversity lottery programme, also known as the green card lottery, which he said the suspect of killing eight people in New York City used to get into the US. Video: The White House 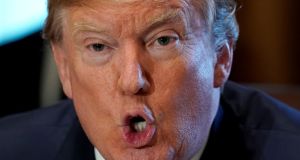 US president Donald Trump speaks during a cabinet meeting at the White House in Washington, US, today. Photograph: Kevin Lamarque/Reuters

US president Donald Trump has said he plans to end a diversity lottery programme, also known as the green card lottery, which he said the Uzbek immigrant who is suspected of killing eight people in New York City used to get into the US.

“Today we mourn the horrifying terrorist attack in New York City, just blocks away from the site of the World Trade Center,” Mr Trump said at the cabinet meeting.

“I am today starting the process of terminating the diversity lottery programme. I’m going to ask Congress to immediately initiate work to get rid of this programme,” he said.

The terrorist came into our country through what is called the "Diversity Visa Lottery Program," a Chuck Schumer beauty. I want merit based.

We are fighting hard for Merit Based immigration, no more Democrat Lottery Systems. We must get MUCH tougher (and smarter). @foxandfriends

‘Send him to Gitmo’

Responding to a shouted question from a reporter at a White House cabinet meeting, Mr Trump said: “I would certainly consider that. Send him to Gitmo.”

Mr Trump’s comments come after senator Lindsey Graham called on the president to treat the alleged attacker as an enemy combatant.

The suspect is currently in custody in New York City, but according to officials has not yet been formally charged.

The green card lottery began in the mid-1980s and was widely regarded as a means to help the hundreds of thousands of Irish fleeing the economic crisis back home. The programme now brings up to 50,000 people to the United States annually, most of them from Africa or Eastern Europe.

In August, the US president announced a plan to prioritise high-skilled, English-speaking immigrants by shifting from a family-based to a skills-based green card system. The plan was criticised by Irish-American campaigners as “racist”.

Mr Trump backed legislation introduced by two Republican senators that aimed to reduce the number of legal immigrants by replacing the “low-skilled” system with a “points-based system” for skilled workers.

Fulfilling a long-promised vow to curb legal immigration, the president said it would benefit the American worker by reducing the number of low-paid, foreign workers and raising wages. – AP/Reuters

1 Coronavirus: Republic reports 22 further deaths, 424 new cases
2 Coronavirus Q&A: How to shop safely during Covid-19
3 Ireland has strategy to ‘break the chains’ of coronavirus - WHO’s Mike Ryan
4 Coronavirus: Situation in Ireland ‘misrepresented’ because of limited testing
5 We need to cancel the Leaving Cert and give students predicted grades
Real news has value SUBSCRIBE