The cyberbully, the torture queen and the swamp creatures

Maureen Dowd: Everything is plausible in Trumpworld 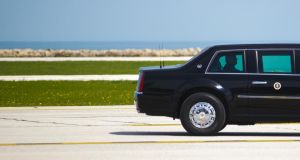 Whatever you imagine could happen in Trumpworld. Photograph: Tom Brenner/New York Times

Once I would have rolled my eyes at a season of Homeland in which the Russians deftly manoeuvred to control whether a Democratic woman, an increasingly paranoid former junior senator from New York, would occupy the Oval Office.

Last year I shook my head at the Billions plot showing a top New York law-enforcement official fighting corruption by day and engaging in sadomasochism by night. There was a time I would have considered it off the wall if Kanye West said he shared dragon energy with Donald Trump.

Now I don’t blink. Everything is plausible.

We have crossed into a surreal dimension where we are limited only by our imaginations. The American identity and American values are fungible at the moment. The guardrails are off.

Our brains are so scrambled that it’s starting to make sense that none of it makes sense.

Michael Cohen, who once had to beg Trump to drop by his son’s bar mitzvah, elbowed into the swamp by pretending he had the president’s ear

For example, it’s dissonant that cybercop Melania strides into the White House Rose Garden to introduce her Be Best plan to help at-risk children at the same time her cyberbully husband unleashes his cruel Be Worst plot to slash the popular children’s-health-benefits programme. But in the Trump era, sure, why not? Everything is plausible.

Consider how the US president lavished praise on Gina Haspel, the evidence-destroying torture queen, tweeting, “There is nobody even close to run the CIA!” At the same time the White House aide Kelly Sadler shrugged off qualms about Haspel from the senator, and torture survivor, John McCain, blithely noting, “He’s dying anyway.”

White House most foul. Everything is plausible – even the jackbooted Dick Cheney rearing his poisonous head to call for the reboot of Torture Inc.

Trump’s renovation of the Wollman Rink is nothing compared with his breathtaking expansion of the capital swamp. He has ushered in a bold new breed of swamp creatures, from Scott Pruitt to Ryan Zinke to Steve Mnuchin to the incomparable Michael “I’m Crushing It” Cohen.

Gina Haspel did a spectacular job today. There is nobody even close to run the CIA!

Cohen, who once had to beg Trump to drop by his son’s bar mitzvah, elbowed into the swamp by pretending he had the president’s ear. He made up a job selling access to a White House where he could not even get a job.

Holding out a tin cup as the president’s “personal attorney”, he racked up more than $2 million from a law firm and corporations, including AT&T, although it quickly became clear that, although he swanned around like a character out of The Sopranos, he was not connected.

Everything is plausible – even Rudy Giuliani continuing his punch-drunk performance by referring to Avenatti as a “pimp”.

The rest of the world was shocked by the scoop by Jane Mayer and Ronan Farrow, in the New Yorker, chronicling Eric Schneiderman’s depravity. But it may have been old news to the Page Six president.

A lawyer for two women who said they had been victims of Schneiderman’s sick proclivities told Judge Kimba Wood, who is overseeing a legal dispute about the raids on Cohen’s office and residences, that he had discussed the women’s allegations with the Trump fixer. Cohen may have passed on the dirt to Trump, who was then warring with the New York attorney general over Trump University.

In 2013 Trump presciently tweeted: “Weiner is gone, Spitzer is gone – next will be lightweight A.G. Eric Schneiderman. Is he a crook? Wait and see, worse than Spitzer or Weiner.”

The machismo, the passion. Tough act to follow. Did you wonder if Vanessa Trump fantasized about Valentin Rivera when intimate with you?

Just when you thought the Trump family saga could not get more absurd, the New York Post, the premiere Trump divorce publication, served up an eye-popping tale about Don jnr’s soon-to-be ex: Vanessa Trump’s high-school romance on the Lower East Side with a Latin King gang member, Valentin Rivera.

And just when you thought the feuds between the Trump and Clinton camps had run out of juice, the former Hillary capo and US state-department adviser Philippe Reines weighed in with a jaw-dropping tweet to Don jnr: “Vanessa being with a Latin King must’ve driven you insanely jealous. The machismo, the passion. Tough act to follow. Did you wonder if she fantasized about Valentin Rivera when intimate with you? She did. Every time.”

Every time, everything is plausible.

Also, the other day a Daily Mail headline screamed, “Steve Bannon was target of bribery plot by top Qatari who invested in Ice Cube’s basketball league to get to Trump’s strategist and boasted ‘Mike Flynn took our money’, rapper claims in court.”

Everything is plausible, even a segue from Ice Cube to Black Cube.

The Observer broke the news that Trump aides hired an Israeli private-intelligence agency to run a “dirty ops” campaign against Obama administration officials who had helped negotiate the Iran nuclear deal, including Ben Rhodes, Barack Obama’s national-security adviser. The firm was Black Cube, the same one hired by Harvey Weinstein to spy on the women he attacked and the reporters working on the story.

Finally, we learned from Jimmy Kimmel Live! on Tuesday that Woody Harrelson and Mike Pence were pals in college.