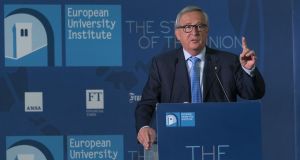 Jean-Claude Juncker speaking at the European University Institute in Florence: “We want all Europeans to be full-time Europeans, not fair-weather Europeans.” Photograph: Claudio Giovannini

Cumbersome EU decision-making by unanimity in foreign affairs and taxation remains an impediment to what the union needs to do, European Commission president Jean-Claude Juncker told a conference in Florence on Friday.

He reiterated his call on member states to agree to majority voting in both areas. “We see clearly we need more Europe in foreign policy,” he said. “The world needs a strong union. We will do our best to produce it.”

Mr Juncker was speaking at the European University Institute’s debate on the “state of the union” themed on the issue of “solidarity”. The conference on Friday moved into the vast, ornate Salone dei Cinquecento in Palazzo Vecchio, Florence’s magnificent town hall.

Its walls and ceilings are adorned with works of Vasari in tribute to Cosimo de Medici and Florence’s battles with Pisa. In the corner is a marble group by Michelangelo whose David presides over the square outside.

Mr Juncker insisted that solidarity was very much part of the founding acts of the EEC. “When all is going well, solidarity develops by itself,” but in times of crisis old tensions emerge, he said, citing the failure of member states to assist the Greeks and Italians in dealing with the migrant crisis.

“We want all Europeans to be full-time Europeans, not fair-weather Europeans,” he said.

The Gothenburg summit had committed to a charter of social rights. But these “should be more than something nice to read, they needed to be a programme of action”.

The proposals were “responsible and realistic”, he said – had the commission taken on board all the ambitions being raised, it would have been forced to propose a budget of 2 per cent of gross national income rather than the 1.11 per cent being suggested.

He defended the proposed cuts in farm spending of 5 per cent. These, the president said, “were not a massacre” and the commission had imposed a ceiling on direct payments that would ensure that the burden was borne by the richest farm enterprises.