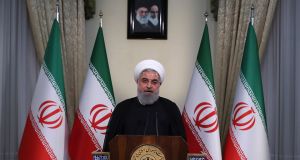 Politicians in Iran have set a US flag ablaze in parliament and shouted “Death to America” after Donald Trump pulled out of the nuclear deal.

As well as the paper flag, they also burned a piece of paper representing the nuclear deal.

The chant “Death to America” long has been used in Iran since its 1979 Islamic Revolution. It also has been common to hear it within parliament.

Iran’s 2015 nuclear deal imposed restrictions on its nuclear programme in return for the lifting of most US and international sanctions.

However, the deal came with time limits and did not address Iran’s ballistic missile programme or its regional policies in Syria and elsewhere.

Mr Trump has repeatedly pointed to those omissions in referring to the accord as the “worst deal ever”.

Proponents of the deal have said those time limits were meant to encourage more discussion with Iran in the future that could eventually address other concerns.

Many Iranians are worried about what Mr Trump’s decision could mean for their country.

The Iranian rial is already trading on the black market at 66,000 to the dollar, despite a government-set rate of 42,000 rials. Many say they have not seen any benefits from the nuclear deal.

1 Transmission of Covid-19 on flight into Ireland linked to 59 infections
2 Covid-19: Public urged to ‘stay at home’ as 1,025 further cases confirmed in State
3 President signs Bill on mother and baby home records into law
4 Lincoln Project rejects threat over Kushner and Ivanka billboards
5 Doctors are being asked to ‘play God’ in deciding who to give flu vaccine to – GP
Real news has value SUBSCRIBE