Melania Trump growing in popularity, unlike her husband 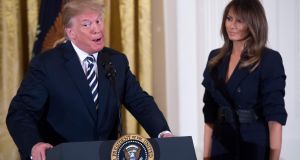 US president Donald Trump speaks alongside First Lady Melania Trump during an event in honour of Military Mothers and Spouses in Washington. Photograph: Getty Images

Was it a parody or a barely-veiled act of defiance against her husband? A serious pronouncement or a rushed rehash of previously-unveiled policies?

On Monday, Melania Trump held her first major set piece as First Lady at an event in the White House Rose Garden.

Her husband sat beaming in the front row. Not used to being out of the limelight he couldn’t resist jumping up at the end and adding his own postlude to his wife’s announcement, telling the assembled dignitaries that “America is truly blessed to have a First Lady who is so devoted to our country and to our children”, before concluding “thank you, thank, you very much” as his wife retreated to her usual Sphynx-like smile and guarded posture.

Melania Trump instead picked a more general campaign: “Be Best”, focusing on children, with three main themes: well-being, opioid abuse and social media. Despite widespread ridicule at her decision to pick online bullying as a pet project earlier this year given her husband’s online behaviour, she has stuck with it.

“Social media,” she said, “can both positively and negatively affect our children. But too often, it is used in negative ways. When children learn positive online behaviours early on, social media can be used in productive ways and can affect positive change.”

There was no perceptible change in the expression of the First Lady or those who had gathered in the Rose Garden as she delivered these words in front of a president who has made online trolling into a political weapon.

Was her statement an elaborate act of irony? Or perhaps it was a coded message to her husband that he may continue to rage online, but she remains committed to a standard of online decorum that her son and other American children can emulate.

Melania and her husband have been seen together only a handful of times since the scandal broke – at the state visit of French president Emanuel Macron and his wife, Brigitte, and at the homecoming this week of three American hostages from North Korea.

Melania, however, has shone more when she was on her own, for example, at Barbara Bush’s funeral last month. Donald Trump stayed away “out of respect for the Bush family” and to avoid security disruptions.

Melania also looked relaxed and at ease when she was snapped in a high-powered selfie in Houston with a group of former presidents and first ladies, including Bill and Hillary Clinton and the Obamas. Indeed, the only other time the Slovenian emigrant seems to come into her own is when visiting Europeans are in town, whether it is the Macrons or Leo Varadkar. Her appearance at the St Patrick’s Day reception in an eye-catching emerald, leopard-print dress was her first appearance at the height of the Stormy Daniels controversy.

Despite or perhaps even because of the very public travails of her marriage, Melania Trump remains relatively popular with the American public. A CNN poll earlier this week put her approval rating at 57 per cent – a 10 per cent jump since January, and a lot higher than her husband’s.

Whether her image will take a hit following a controversy over her speech this week remains to be seen– it emerged that a booklet issued by the White House on her behalf had in fact been issued in an almost identical format during Barack Obama’s presidency.

The wisdom of her “Be Best” catchphrase was also in question on Thursday after Senate minority leader Chuck Schumer used the slogan to hit back at a tweet sent by Donald Trump.

“#BeBest” the New York Democrat replied to the president on Twitter after he labelled him, not for the first time, “Cryin’ Chuck”. Whatever the controversies surrounding Melania Trump they are likely to pale into significance compared with the drama engulfing her husband. Like many Americans, for Melania Trump, the response to the chaos unfolding around her may be to double down, shut out the noise and get through the remainder of the Trump presidency.