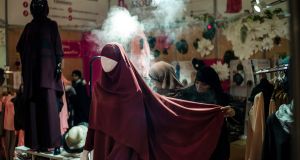 A woman irons during a Muslim fair in Paris. Earlier this month, the head of a regional council for Marine Le Pen’s RN party called for a mother to take her headscarf off ‘in the name of the principles of the Republic’. Photograph: Yoan Valat/EPA

Tension and confusion regarding the treatment of French Muslims have increased dramatically since a deaf computer technician and Muslim convert stabbed four colleagues to death at Paris police headquarters on October 5th.

The question of whether women wearing headscarves should be allowed to accompany children on school outings has dominated political debate in France for the past week. It has resulted in a lawsuit, a draft law in the Senate and heated quarrels within President Emmanuel Macron’s majority.

Macron is under growing pressure to take a stand on the tangled issues involved.

In a speech at a memorial service for the slain policemen on October 8th, Macron said French institutions “cannot get rid of the Islamist hydra on their own. No, it is the entire nation that must unite, mobilise, act.” Macron called for a “society of vigiliance” that “knows how to recognise ... the deviations, these little gestures that show a distancing from the laws and values of the Republic”.

That speech was praised by the far right Rassemblement National (RN). Rachid Benzine, a researcher and expert on Islam, warned of the danger of “a new McCarthyism” that would single out Muslims for suspicion.

An incident at a regional council meeting in Dijon on October 11th inflamed passions. A class of 10-year-olds sat down in the visitors’ gallery, as part of the children’s initiation to public life. Julien Odoul, an elected official from the RN, said the mother of a schoolboy who accompanied the group should remove her headscarf.

“We are in a public building, in a democratic place,” Odoul said. “Madame is free to wear her veil at home, in the street, but not here, not today... It is an unbearable provocation... We cannot begin the session with a minute’s silence for the victims of the police headquarters and accept that.”

The woman’s son hid his face in his mother’s robe and cried. The RN group left the chamber, followed by the schoolchildren. Another RN official, a woman, cornered the veiled woman in the corridor outside the toilet and said, “You’re submissive. Just wait until the Russians get here. You’ll get out then.”

A lawyer for the Muslim woman, identified as Fatima E, said she would file a lawsuit for racist violence and hate speech against Odoul.

The split between left- and right-leaning members of Macron’s majority began on the Sunday talk shows two days later. Odoul’s remarks were “shocking”, said government spokeswoman Sibeth Ndiaye. “Personally, I have no problem with a veiled woman participating in school outings. Integration means not shutting women in.”

The CFCM, which represents mainstream French Muslims, expressed concern over `hysterical reactions on the question of the Muslim veil'

Education minister Jean-Michel Blanquer was interviewed at the same time on a different channel. It was not illegal for women in headscarves to join school outings, he admitted. “But we do not want to encourage the phenomenon. The veil, as such, is not desirable in our society.”

French officials spent much of the week taking sides. Finance minister Bruno Le Maire agreed with Blanquer that veiled women do not belong in French society.

Aurélien Taché, a deputy in the National Assembly, told Le Point magazine he saw little difference between Blanquer’s statement and Odoul’s remarks in Dijon. For a member of Macron’s La République en Marche to compare a cabinet minister from the same party to a far right politician was a bridge too far. Blanquer referred Taché to LREM’s disciplinary commission.

Firemen in Créteil refused to receive a school group because two accompanying mothers wore headscarves. The University of Cergy-Pointoise asked professors to report “weak signals” of radicalisation among colleagues and students, including the appearance of headscarves, beards, long robes, absenteeism at prayer time or a sudden refusal to drink alcohol. The questionnaire caused an uproar and was quickly withdrawn.

The CFCM, which represents mainstream French Muslims, expressed concern over “hysterical reactions on the question of the Muslim veil”.

A group of 90 personalities published a full-page open letter to Macron in Le Monde exhorting him to “Say stop to hatred against the Muslims of France”. Their text recalled that in 2015, Latifa Ibn Ziaten, the mother of a French soldier who was murdered by a Muslim extremist, was booed in the National Assembly because she wore a headscarf. Last month, a woman wearing a headscarf was stabbed by a drunk in the Loire department.

Yannick Jadot, a Green MEP, called Macron a “pyromaniac fireman” for intiating a debate on immigration this autumn.

At a press conference on Wednesday evening, Macron was asked if he bore a degree of responsibility for the tensions of the past week. “Everything has been conflated in the debate and commentaries,” Macron said. He asked the French to distinguish between terrorism, sectarianism and Islam, not to stigmatise Muslims and to “stick together” as French people. The president refused to take a position on the dispute within his own ranks.