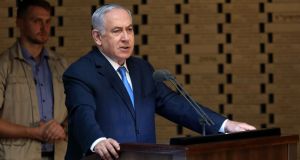 The move does not necessarily end Binyamin Netanyahu’s chances of leading the country’s next administration. Photograph: Gali Tibbon/AFP/Getty

Binyamin Netanyahu has abandoned attempts to build a governing coalition in the wake of Israel’s second deadlocked elections this year.

He blamed his rivals on Monday for not agreeing to make him prime minister, a stalemate that raises the possibility of an unprecedented third poll.

Mr Netanyahu said in a video on Facebook that he would return his mandate to form a government to President Reuven Rivlin, who is widely expected to now ask Benny Gantz, the ex-army chief turned politician, to try and find 61 members of the Knesset to back his own bid for the premiership.

“Ever since receiving the mandate [to form a government] I have worked relentlessly ... to establish a broad national unity government,” Mr Netanyahu said in the social media post. “This is what the people want ... but [Mr Gantz] refused time after time.”

The post-election coalition building process descended into bickering and name-calling last week, with Mr Gantz saying Mr Netanyahu had made him an offer “that I can’t not refuse”.

The neophyte Blue and White political alliance edged Mr Netanyahu’s Likud by one seat in September polls, but the long-running prime minister’s rightwing allies from other parties, including the ultraorthodox religious minority, took him closer to the 61 seat minimum.

Mr Netanyahu had insisted on Mr Gantz joining him in a rotating premiership, but Mr Gantz refused to consider that option while Mr Netanyahu awaits an indictment on charges of corruption.

Once Mr Gantz formally receives the mandate to try his own hand at forming a coalition, he will have 28 days. Failing that, the country would be likely to face an unprecedented third election, leaving a question mark over Israel leadership that will have lasted almost a year.

Time is in Mr Gantz’s favour; Mr Netanyahu is widely expected to face charges of bribery, corruption and breach of trust from attorney-general Avichai Mandelblit by December. Mr Netanyahu has denied the allegations as a “witch-hunt” and has said he won’t step from the leadership of Likud.

But the numbers are not on the challenger’s side; he cannot form a government without the combined support of both the Arab Joint List, which won 13 seats in the September polls, catapulting it to be the third-largest party in the Knesset, and a one-time Likud ally, Avigdor Lieberman, whose secular rightwing party won 9 seats.

Mr Lieberman is vehemently opposed to both the ultraorthodox partners of prior Likud coalitions and to the Arab parties in parliament. He has instead floated a coalition between his Yisrael Beiteinu party, Likud and Mr Gantz’s Blue and White, an idea that has gone nowhere.

Mr Netanyahu has already attacked the possibility of any minority government supported by the Arab parties as a danger to Israel’s security, doubling down on the anti-Arab rhetoric that coloured his campaigns in both elections this year.

Hours before abandoning his own attempts at forming a government, Mr Netanyahu released an edited video with clips of the two major Arab group leaders, Ayman Odeh and Ahmed Tibi, discussing Palestinian statehood and the “martyrdom” of militants.

“How do Gantz, Lapid and Lieberman contend with Iran, Hizbullah and Hamas when they’re dependent on them?” the voiceover warned. “A minority government is a disaster.” – Copyright The Financial Times Limited 2019