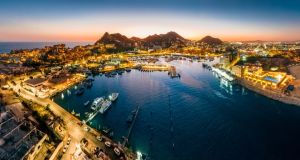 About 10 days ago, 70 people in their 20s flew to Cabo San Lucas in Mexico onboard a chartered flight from Texas.

Twenty-eight students who returned to Texas after spring break at Mexico’s Cabo San Lucas beach resort have tested positive for coronavirus, although Mexican officials pushed back against the suggestion that they picked up the virus at the tourist spot.

The 28 confirmed cases are self-isolating and dozens more are under quarantine while being monitored and tested, the city of Austin said in a statement on Tuesday, drawing attention to possibly low detection of cases in Mexico.

“About a week-and-a-half ago, approximately 70 people in their 20s departed in a chartered plane for a spring break trip,” the city said, adding that some of the group returned on separate commercial flights.

“Currently, 28 young adults on this trip have tested positive for Covid-19 and dozens more are under public health investigation,” the statement said.

However, the Los Cabos Trust, which runs tourism sites including the resort where the vacationers stayed, said the group departed on March 11th, implying they did not come in contact with the coronavirus until later.

“Twenty days after their return to Austin, Texas, they had already passed the incubation period established by the World Health Organisation,” the trust said in a statement. It added that no resort staff member presented coronavirus symptoms.

“Looking at the incubation period, they returned and were infected there, that’s the natural course of this illness,” said Victor George Flores, the health minister for Baja California Sur, the peninsular state where Cabo San Lucas is located, in a news conference.

“It’s proven because among the workers where they were staying, there are no positive cases.”

Mexico overall has confirmed just over 1,200 cases of coronavirus and 29 deaths, a fraction of the numbers in its northern neighbor. Critics of the government’s strategy say a relatively low number of tests carried out mean more cases could be undetected.

Austin public health authorities and the University of Texas at Austin have contacted every “spring breaker onboard the plane using flight manifests from the Center for Disease Control and Prevention,” the city’s statement said.

Many of the people are students at the University of Texas at Austin, the school said in a statement obtained by local television station KVUE ABC. The university did not immediately reply to a Reuters request for comment.

At the time of the trip, Mexico was not under a US federal travel advisory, but had advised against non-essential travel.

“A leisure vacation of any kind is not considered essential,” the city said.

The government of president Andres Manuel Lopez Obrador has been reluctant to implement coronavirus restrictions that could adversely affect the economy and jobs, and only in recent days stepped up the message that people should stay at home.

Still, Mexico’s usually packed beaches, bars and clubs have largely emptied after US authorities issued a ban on non-essential travel to Mexico, including for tourist trips across the US-Mexico land border.