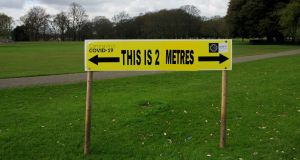 Public health officials are to ramp up efforts to tackle coronavirus outbreaks in nursing homes and hospitals. Photograph: Gareth Chaney/Collins

Public health officials are to ramp up efforts to tackle coronavirus outbreaks in nursing homes and hospitals in response to a large increase of clusters of the disease in residential settings.

Tuesday saw the highest daily figures yet for deaths and newly confirmed cases of Covid-19, though the National Public Health Emergency Team (NPHET) said the figures were in line with current trends.

Another 17 patients – 13 men and four women – diagnosed with Covid-19 have died, officials reported on Tuesday evening.

The median age of the deaths reported is 84, and eight of the patients were reported as having underlying health conditions.

In Northern Ireland, six additional deaths were recorded, bringing the number of fatalities in the North to 28. And total cases reached 586.

Chief medical officer Dr Tony Holohan said the restrictive measures introduced this month had helped halve the daily increase in case numbers, but the NPHET now wanted to interrupt the spread of the virus in institutional settings such as nursing homes and other residential accommodations, and hospitals.

“The measures that we have recommended today should significantly enhance the preparedness and response to cases and outbreaks in nursing homes and other residential settings,” Dr Holohan said.

Among the measures expected to be introduced are increased availability of personal protective equipment (PPE) and health checks for nursing home staff. Outbreak teams are to be set up to combat specific clusters of the disease, and the Health Information and Quality Authority and the Mental Health Commission are to risk assess residential institutions.

Consideration is also being given to providing separate accommodation for some nursing home and hospital staff in order to minimise the risk of onward transmission of the virus. Restrictions may be introduced to discourage locum staff from working in too many different locations.

For the first time, a detailed breakdown has been provided of coronavirus-related deaths. Of the total of 71 deaths, 52 were male and 19 female. Some 83 per cent were over the age of 70 years, and two-thirds were in the east of the country. Of those who have died, 54 had underlying health conditions.

Some 325 new cases of the disease were also reported on Tuesday, bringing the total number of cases to 3,235. This is well under the 15,000 forecast a month ago in an “unmitigated scenario” where no restrictive measures were introduced.

To date, 30,213 Covid-19 tests have been carried out on patients, according to NPHET.

Officials acknowledged there had been a “significant fall-off” in the number of people tested because of supply problems relating to testing kits.

Dr Cillian de Gascun, director of the National Virus Reference Laboratory, acknowledged some people in the community were having to wait seven to 10 days to be tested.

Meanwhile, regulations allowing An Garda Síochána to arrest people who are not complying with the Government’s policies on social distancing are expected to be signed shortly, possibly as early as Wednesday.

Construction on the national children’s hospital project stopped after it was deemed not to be an essential construction service.

The main contractor, Bam Ireland, said it stopped work immediately after getting confirmation of the non-essential status of the project from the National Paediatric Hospital Development Board.

Separately, Government and the Northern Ireland Executive are to agree a memorandum of understanding which will formalise cross-Border collaboration over the response to coronavirus.

It is understood the agreement will be signed by the chief medical officers in the respective jurisdictions in the coming days.

Internationally, Spain, France and the UK reported their highest daily death tolls from coronavirus on Tuesday as the number of fatalities in the US passed those in China.

Spain registered 849 fatalities related to coronavirus overnight – the highest number in 24 hours since the epidemic started.