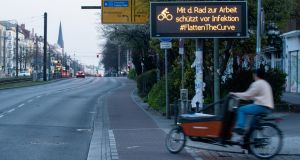 A man rides a cargo bike next to a sign reading ‘Riding to work by bike avoids an infection – #FlattenTheCurve’ in Berlin. Photograph: Alexander Becher/EPA

My walk around the gardens of Charlottenburg Palace ended with the sight of a bedsheet flapping in the breeze as it hung from a nearby apartment balcony. Someone had painted an arrow running across the long side. Above the arrow, in firm letters, the sheet told us: “This is two metres.”

My walking partner, only 1.5 metres away, laughed at a sight. Was it a public order announcement, I wondered, or a passive-aggressive intervention?

“That must be the home of the guy I saw yesterday,” said Michael.

The previous day he had encountered a man marching up the same street with a sign reading “Das ist keine 2 Meter” – that’s not two metres. I laughed when I heard this, assuming the man was channelling the absurdist humour of Fr Ted’s immortal protest sign: “Down with this sort of thing.”

“No,” said Michael, “this man was deadly serious.”

In these deadly serious times, it’s fascinating to see my collection of Germanecdotes swell with tales that confirm – and shatter – national stereotypes.

A depressing number of my corona chronicles involve “Rechthaberei”: the deep-seated cultural need of some Germans to be right, to be seen to be right, and to correct people – even strangers– they perceive to be in the wrong.

A friend was visited last week by local police in the northern state of Schleswig-Holstein, which has closed its borders to everyone except residents. The police, looking embarrassed, said they had had a tip-off that a stranger with a Berlin-registered car was visiting him illegally.

The stranger was his girlfriend, living with him in the countryside until the pandemic passes. My friend convinced the police they were not breaking the law and, when he posted his experience on Twitter, many rolled their digital eyes in solidarity over his neighbourhood snitch.

“Are we going to go back to East Germany,” wrote one, “where each apartment had a ‘house book’ to register visitors, handed over to the police each month?”

Others were more ambivalent. One wrote: “Informers are silly but so too are those who make them necessary by coming up with their own rules.”

With too much time on their hands these days, many Germans are anxious to learn if there is a tipping point where the concerned citizen becomes an informer. Criminal law professor Reinhard Merkel, a member of Germany’s ethics commission, suggested that collective responsibility required in a crisis such as this had shifted the balance.

“People who register [wrong] behaviour are not informers, but are taking care of a legitimate moral necessity,” he announced crisply on German radio.

Police are responding differently to these public invigilators. Some are delighted at the extra support while others are asking people to resolve situations themselves, if possible, and not clog up emergency phone lines.

As a deterrent, Berlin police have issued a new list of fines for breaking the coronavirus restrictions: operating a shop, bar, sauna or gym (up to €10,000); holding a public event or allowing queues without distancing (up to €2,500); visiting a retirement home (up to €1,000).

For all the rules and denunciation, the crisis has shattered other stereotypes to demonstrate many Germans’ inventive, pragmatic and empathetic sides.

Pianist Igor Levit was among the first musicians to offer daily concerts live-streamed from his Berlin apartment. Two magicians, the Ehrlich Brothers, are giving free shows each day online. People across the country have joined a campaign to buy vouchers from small businesses forced to close – and now facing ruin.

Entire Berlin neigbourhoods have organised online to order their lunch for collection from one local restaurant each day, keeping the staff and kitchen busy. Farmers in Brandenburg, struggling with the approaching white asparagus season and no seasonal workers, are allowing people to rent a stretch of field and harvest their own.

Perhaps it was cabin fever but, last Saturday evening, I felt the informer bug itching. My downstairs neighbour, deciding the ban on social gatherings didn’t apply to him, had invited friends round for a loud, boozy video-game coronaparty. Some hours before the party broke up at 4.30am, another neighbour texted that she would call the police. I suggested she hold off: the police have more important things to do, I replied, and I had a better idea.

Bright and early the next morning I sat down at my piano to give my neighbour, sleeping directly below, a gentle wake-up call.

I didn’t know what I was going to play until my fingers settled on a rousing rendition of Beethoven’s Ode to Joy. My joyous feet hammered on the floor to keep time. When I’d finished three rounds, feeling the spark of the gods, I heard applause from the street through the open window.

In the era of coronavirus, when it comes to making a point, a piano beats a bedsheet every time.