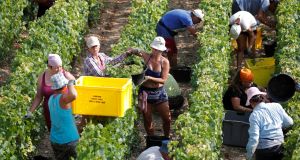 The European Commission has urged member states to allow vital workers to cross borders as restrictions on travel threaten to leave harvests unpicked in the fields and food supply at risk due to a massive labour shortage.

European Union countries have placed checks and restrictions along borders with each other in an unprecedented breakdown in free movement in the bloc as governments scramble to get the coronavirus pandemic under control.

The farming, food production and distribution industries are heavily reliant on cross-border labour, with hundreds of thousands of workers travelling seasonally from eastern Europe to pick fruit and vegetables.

In the Netherlands, the world’s biggest exporter of agricultural goods after the United States, farming associations have launched websites to appeal for people who usually work in catering, cleaning or the hard-hit flower industry to sign up “in order to continue to provide sufficient food”.

“Farmers and horticulturalists are looking for people who want to help maintain the food supply in the Netherlands,” said a statement from farming association LTO Noord. “Due to the corona crisis, many foreign workers cannot come.”

Confronting Coronavirus · Why did it take so long for a nursing home plan to be put in place?

In France, the government has appealed to hairdressers and waiters to register to work the fields. “It is necessary to mobilise to meet the food needs of the population,” reads one recruitment website.

Germany banned seasonal workers until further notice last week, part of strict border controls that farmers warn imperil the fate of the country’s treasured asparagus harvest, which is due to be picked within weeks.

Usually, about 300,000 workers travel mostly from Poland and Romania to Germany to pick crops each year. Neighbouring Poland, a key transit country for workers, has closed its borders to foreigners.

“The bans, which are preventing foreign seasonal workers entering the country, are endangering sowing, planting and harvesting,” warned the association of German fruit and vegetable processors BOGK. “What is not harvested cannot be processed . . . supplies for the population would no longer be secure from summer 2020.”

It added that an online platform set up by the agriculture ministry would be unlikely to find sufficient workers.

European Commission president Ursula von der Leyen appealed for European countries to ease restrictions to allow key workers to pass on Monday, saying about 1.5 million people in the bloc need to cross a border to get to work.

“The vast majority of people working in hospitals in Luxembourg live in France or Belgium. The healthcare system in Luxembourg would suffer hugely if these workers were several hours late every day because of long waiting queues at the borders,” Ms von der Leyen said.

“And we need food in shops and on our dinner table, so we need those who produce it and deliver it to be able to move too. We need people to plant and to harvest our crops,” she said. “We have to make sure we have enough seasonal workers in the agricultural sector.”

Coronavirus: Patients forced to share beds in India as cases continue to rise 07:21
Protesters gather in US cities on Thursday night after death of George Floyd 06:47
Trump announces clampdown on social media companies 22:19
Boris Johnson brushes off police statement that Cummings may have broken law 20:53
Coronavirus: French look forward to ‘liberty’ with second stage of reopening 20:01

1 Coronavirus: HSE experts support the early reopening of schools
2 Quarantine may be lifted for arrivals into Ireland from countries with low Covid-19 cases
3 The momentum behind calls to ease lockdown may become irresistible for politicians
4 Irish planning for no-deal Brexit to restart as EU-UK talks go badly
5 All students will not return to school even if social distancing relaxed – McHugh
Real news has value SUBSCRIBE