Stormy Daniels: I was threatened to keep me quiet about Trump

Speaking on US television show 60 Minutes, adult-film actor Stormy Daniels alleges she was threatened to keep quiet over her reported relationship with Donald Trump. Video: 60 Minutes/CBS 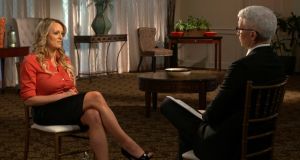 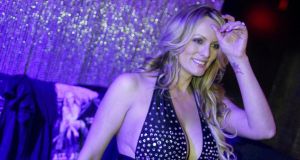 Stormy Daniels: “He leaned around and looked at my daughter and said, ‘That’s a beautiful little girl. It’d be a shame if something happened to her mom.’ Photograph: Eduardo Munoz/Reuters

The adult-film actor who claims she had sex with Donald Trump before he was president of the United States said on Sunday that she had been threatened in 2011, while in a parking lot with her infant daughter, to discourage her from discussing the relationship.

Stormy Daniels, whose real name is Stephanie Clifford, told CBS News’s 60 Minutes that she was on her way to a fitness class with her child when a man approached her. “And a guy walked up on me and said to me, ‘Leave Trump alone. Forget the story.’ And then he leaned around and looked at my daughter and said, ‘That’s a beautiful little girl. It’d be a shame if something happened to her mom.’ And then he was gone,” Daniels said.

Daniels sued the president on March 6th, claiming Mr Trump failed to sign an agreement for her to keep quiet about an “intimate” relationship between them. Daniels’s appearance represented back-to-back trouble for Trump after an interview broadcast last week on CNN with the former Playboy model Karen McDougal, who described a 10-month affair with Mr Trump that began in 2006.

Mr Trump would have been married to his wife, Melania, during both the alleged extramarital relationships. The first lady accompanied him this weekend to his Florida golf club.

The president returned to the White House on Sunday but Mrs Trump did not. A White House spokeswoman said Melania stayed behind as is her tradition during their son’s school holiday.

Daniels told 60 Minutes that she and Mr Trump had had sexual relations only once but that she had seen him on other occasions and he had kept in touch with her. She said she was not attracted to Trump, who was 60, to Daniels’s 27, in 2006.

“I have no reason to lie”

The White House has denied he had an affair with Daniels, although the president’s lawyer Michael Cohen said he paid her $130,000 of his own money during the 2016 election campaign.

Mr Trump did not respond to reporters’ shouted questions about whether he would watch the interview when he returned to the White House from Florida. Cohen, who has denied there was an affair, has not explained why he made the payment or said whether Trump was aware of it.

Daniels and her attorney would not discuss in the interview whether they had text messages or other materials that might verify her story. She was asked why she repeatedly signed statements denying the relationship with Trump, and acknowledged that there could be questions about her credibility.

“I felt intimidated and . . . honestly bullied. And I didn’t know what to do. And so I signed it,” Daniels said.

Asked why viewers could be confident now that she was telling the truth, she said: “Cause I have no reason to lie. I’m opening myself up for, you know, possible danger, and definitely a whole lot of s***.” – Reuters