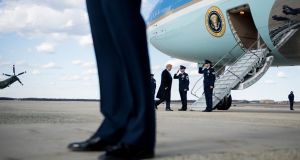 Donald Trump: the US president boards Air Force One for Mar-a-Lago on Friday. Photograph: Brendan Smialowski/AFP

Donald Trump has decided not to hire two lawyers who were announced last week as new additions to his legal team, leaving him with a shrinking stable of lawyers as the investigation by the special counsel, Robert Mueller, enters an intense phase.

“The president is disappointed that conflicts prevent Joe diGenova and Victoria Toensing from joining the president’s special counsel legal team,” Mr Trump’s personal lawyer, Jay Sekulow, said in a statement on Sunday. “However, those conflicts do not prevent them from assisting the president in other legal matters. The president looks forward to working with them.”

The upheaval on the legal team comes at a critical time for Mr Trump. The president’s former lead lawyer, John Dowd, quit the team on Thursday, just as Mr Trump is deciding whether to sit with Mr Mueller for an interview. At the moment Mr Sekulow is the president’s chief outside lawyer, as his longtime New York lawyer, Marc Kasowitz, remains on the periphery.

Although the president’s lawyers, including Mr Dowd, had told him that the investigation would be over by this point, it seems to be accelerating, as Mr Mueller appears to be looking into a wide range of matters related to Mr Trump’s corporate activities, his 2016 campaign, his associates and his time in office.

The president met diGenova and Toensing, who are married, in recent days to discuss the possibility that they would join his legal team in the Mueller case. According to two people told of details about the meeting, the president did not believe he had personal chemistry with Mr diGenova and Ms Toensing.

Many lawyers and top law firms want to represent me in the Russia case...don’t believe the Fake News narrative that it is hard to find a lawyer who wants to take this on. Fame & fortune will NEVER be turned down by a lawyer, though some are conflicted. Problem is that a new......

....lawyer or law firm will take months to get up to speed (if for no other reason than they can bill more), which is unfair to our great country - and I am very happy with my existing team. Besides, there was NO COLLUSION with Russia, except by Crooked Hillary and the Dems!

But beyond that Ms Toensing is representing Mark Corallo, who was the spokesman for Mr Trump’s legal team in 2017 before they parted ways. Mr Corallo has told investigators that he was concerned that a close aide to Trump, Hope Hicks, may have been planning to obstruct justice during the drafting of a statement about a meeting between a Russian lawyer and Donald Trump jnr during the campaign.

Ms Hicks’ lawyer has strongly denied that suggestion, and White House aides said Mr Corallo’s assertion had come up in discussions with the president as he weighed whether to go ahead with Mr diGenova and Ms Toensing. Mr DiGenova had been expected to serve as an outspoken voice for the president, as Mr Trump has increased his attacks on Mr Mueller. Mr DiGenova has endorsed the notion that a secretive group of FBI agents concocted the Russia investigation as a way to keep Mr Trump from becoming president, a theory with little supporting evidence.

“There was a brazen plot to illegally exonerate Hillary Clinton and, if she didn’t win the election, to then frame Donald Trump with a falsely created crime,” he had told Fox News in January.

Earlier on Sunday Mr Trump took to Twitter from his Florida resort to insist that he faced no problems finding lawyers to represent him in the Russia investigation. “Fame & fortune will never be turned down by a lawyer, though some are conflicted,” Mr Trump said in a tweet. The president insisted that “many lawyers and top law firms want to represent me in the Russia case” and that reports of flux on his team were a “Fake News narrative”. Adding new lawyers, he said, would be costly because they would take months “to get up to speed (if for no other reason than they can bill more).” “I am very happy with my existing team,” he added.

The news about the cancelled legal appointments came as White House officials were girding themselves for an interview on Sunday evening on the CBS program 60 Minutes with Stephanie Clifford, the porn star known as Stormy Daniels. She claims to have had a sexual relationship with Mr Trump, and she signed a nondisclosure agreement with one of his lawyers, Michael Cohen, during the 2016 campaign. Mr Trump and his wife, Melania, will be far apart by the time the interview airs. The White House announced that the first lady would stay behind in Florida when the president returned to Washington on Sunday afternoon. A spokeswoman, Lindsay Walters, said it was “their tradition for spring break”.

On Sunday one of Donald Trump’s closest friends, Christopher Ruddy, said the president was “perplexed” by reports of turmoil in his administration. Speaking on the ABC program This Week, Ruddy, who is the chief executive of Newsmax Media, said he expected the chief of staff, John Kelly, to stay in his job, despite the president’s chafing at what he sees as the restrictions Mr Kelly has placed on him.

But Mr Ruddy, citing sources other than the president, said he expected the secretary of veterans affairs, David Shulkin, to leave the cabinet soon. Mr Shulkin’s departure has been widely expected. And Mr Ruddy played down reports that Ben Carson, secretary of housing and urban development, was in trouble, despite President Trump’s private criticism of Mr Carson to advisers after revelations of excessive spending on an office dining-room set.

Ashleigh Barry, a spokeswoman for Mr Shulkin, said on Sunday that there were no personnel changes at the department to announce. “President Trump has made clear that he expects the department’s sole focus to be on providing quality care to America’s veterans, who have sacrificed to keep this country free and safe,” she said. – New York Times