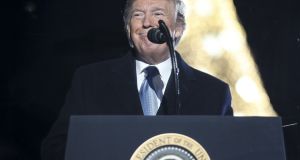 Donald Trump loves to claim the credit for stock market gains during his presidency but a Financial Times poll “casts doubt on whether rise in equity prices will aid Trump’s re-election bid”, the paper reported last week. That’s one way of looking it. Yes, 61 per cent of Americans say stock market movements have little or no effect on their financial wellbeing. Yes, many take no notice of the stock market – 60 per cent thought stocks had declined or stayed the same this year, when in fact the S&P 500 has soared some 25 per cent.

Still, Trump will hardly be dismayed; a large minority (39 per cent) said stock market performance had a “very strong” or “somewhat strong” impact on their personal finances. If Trump manages to persuade even a small number of this group that their retirement fund is safer with him at the helm, then it may well tilt next year’s presidential election his way.

Similarly, he may be further boosted by some non-investors viewing the stock market as the government’s economic report card. A recent study confirmed stock market performance can affect voting preferences, concluding it “may very well affect which party wins a county, a state, and even ultimately, the presidency”. Of course, Trump is playing a risky game by using the bull market as a presidential rating tool. Stocks could fall next year for any number of reasons, thus hurting his re-election chances. Right now, however, market strength augurs well for Trump, and nothing in the FT poll suggests otherwise.

1 Ireland has fifth-largest number of billionaires per capita in the world, says Oxfam
2 Irish rents see second-highest increase in the EU since 2007
3 Boeing’s 737 Max will fly again in 2020, Avolon predicts
4 Chris Johns: Ireland risks populist culture war over property and pensions
5 State-backed Finance Ireland weighs stock market flotation in 2020
6 PTSB finance and operations executives vie for chief executive job
7 Companies should not use the climate crisis as a scapegoat
8 Ireland ranked second in Europe for data breach notifications
9 ‘The only time I saved money was some coins in my first piggy bank’
10 Irish billionaires, Hogan goes to Davos, PTSB’s CEO race and Ibec’s election wishlist
Real news has value SUBSCRIBE
Save money on international transfers