Bill Barr’s appointment may be shrewdest card Trump has played 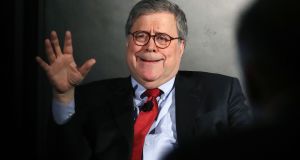 US attorney general Bill Barr: claimed the FBI launched an “intrusive investigation . . . on the thinnest of suspicions”. Photograph: Mark Wilson/Getty

In November 2018, after months of recriminations and insults on Twitter, attorney general Jeff Sessions was forced out by President Donald Trump.

Sessions, an Alabama senator who was an early Trump supporter during the 2016 campaign, was rewarded with a plum job as head of the justice department after the election. But Trump never forgave him for recusing himself from the investigation into Russian electoral interference a few months later, paving the way for the appointment of special counsel Robert Mueller.

Trump’s decision to tap Bill Barr to succeed Sessions was something of a surprise. A well-established lawyer in Republican circles who had previously served as attorney general during the first Bush administration in the early 1990s, the studious, wide-eyed Barr seemed very different to the brash Trump in style and personality.

But his legal stance merited attention. A strong proponent of the principle of executive power and the constitutional rights of a US president, Barr sent an unsolicited memo to the department of justice last year criticising the Mueller report, and arguing that Trump’s decision to fire FBI chief James Comey did not constitute obstruction of justice.

Barr passed his Senate confirmation hearing with relatively little fuss. Many Democrats seemed content he would take an objective, no-nonsense approach to the job and fulfil his constitutional duties as the nation’s top lawyer.

In fact, Barr’s appointment has proved to be one of Trump’s shrewdest choices. The attorney general has been a steadfast advocate for the president.

An indication of Barr’s priorities came with the publication of the Mueller report into Russian electoral interference in March.

Rather than publish the long-awaited special counsel report in its entirety, Barr and his team issued a four-page summary, detailing its main findings. It stated that the investigation found no evidence of conspiracy between the Trump campaign team and Russia. It also said that while the probe had reached no conclusions about obstruction of justice, it was Barr’s judgment the report identified no actions that “constitute obstructive conduct”.

In fact, when the full 448-page report was published more than three weeks later, the picture was more nuanced. Though Mueller did not accuse Trump of obstruction of justice, neither did he clear him.

“While this report does not conclude that the president committed a crime, it also does not exonerate him,” Mueller wrote, describing several instances where Trump tried to obstruct the investigation, including firing Comey and directing his legal counsel Don McGahn to fire Mueller himself.

This week, Barr was back in the public eye with the publication of the long-awaited report by the inspector general of the department of justice on the origins of the Russia probe. Trump and his supporters have long argued that political bias against the president in the US intelligence services prompted the investigation.

The inspector general’s report debunked this hypothesis, though it did call out the FBI for serious errors in seeking special court permission to wiretap a US citizen, in this case Carter Page, a former Trump campaign adviser.

Barr made it clear where he stood on the report. In a statement minutes after its release on Monday, he said he disagreed with its findings, claiming the FBI launched an “intrusive investigation of a US presidential campaign on the thinnest of suspicions that, in my view, were insufficient to justify the steps taken”.

Barr’s decision to effectively side with the president over US law enforcement officials was a boon to Republicans, who seized on the allegations of FBI errors.

Trump’s appointment of Barr a year ago has proved wise in other ways, as he seeks to maintain the support of the conservative religious vote in next year’s election. Barr delivered a speech at the University of Notre Dame in October in which he warned that America was facing the “organised destruction” of religion.

“Secularists, and their allies among the progressives, have marshalled all the force of mass communications, popular culture, the entertainment industry, and academia in an unremitting assault on religion and traditional values,” he said.

The move by Barr, a practising Catholic and opponent of abortion, to deliver the speech seemed ill-judged given the constitutionally mandated separation of church and state he is supposed to uphold. But it is likely to have been duly noted by conservative voters, and taken as another reason why millions of people will vote to re-elect Donald Trump in November 2020.