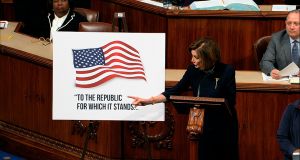 House speaker Nancy Pelosi speaks as the House of Representatives debates the articles of impeachment against President Donald Trump at the Capitol in Washington on Wednesday. Photograph: House Television via AP

Senior Republican senators have stressed their preference for a short impeachment trial of President Donald Trump if the process moves to the Senate as expected next year.

Following Wednesday’s expected vote to impeach Mr Trump, the Senate is likely to take up the impeachment process under rules set out in the American constitution.

“My goal is to have a short a trial as possible,” he said, accusing Democrats in the House of Representatives of “weaponising impeachment”.

Mr Graham said he did not support the idea of subpoenaing witnesses – either those summoned by Mr Trump or by Senate minority leader Chuck Schumer, who suggested this week that witnesses such as White House chief of staff Mick Mulvaney and former national security adviser John Bolton should be summoned to a Senate trial.

The scope and length of the trial is likely to be decided by Republicans, who control 53 of the 100 seats in the Senate.

Senate majority leader Mitch McConnell has also hinted that he favours a swift trial early next year. With a two-thirds majority needed to convict Mr Trump, the president is unlikely to be removed from office given the Republicans’ control of the upper chamber.

Wednesday marked a historic moment in US politics as the House of Representatives debated articles of impeachment against Mr Trump. It marked the culmination of a process that began in September, when House speaker Nancy Pelosi announced that she was opening an impeachment inquiry after details of a phone call between Mr Trump and Ukrainian president Volodymyr Zelenskiy were released.

On October 31st the full House of Representatives voted to proceed with the inquiry, paving the way for public hearings in the House intelligence and judiciary committees.

Democrats argue that Mr Trump committed impeachable offences when he asked Mr Zelenskiy for a “favour” during his July 25th phone call.

Several witnesses subsequently testified in the inquiry that Mr Trump and associates threatened to withhold military aid and a possible Oval Office meeting if Ukraine did not open two investigations – one into former vice-president Joe Biden and his son, who served on the board of a Ukrainian company when his father was in office, and another into unconfirmed theories about Ukrainian interference in the 2016 election.

“President Trump has broken his oath of office,” he said, as he urged the House to back impeachment. “His conduct continues to undermine our constitution and threaten our next election. His actions warrant his impeachment and demand his removal from office.”

Several Democrats from more moderate districts stressed that they had been opposed to impeachment before the Ukraine evidence emerged. “I didn’t come to Congress to impeach the president,” said Sylvia Garcia, a Democrat from Texas.

“Even when he separated babies from their parents at the border, even when he took money from our troops to build his wall, no I didn’t call for impeachment . . . As a former judge, I took my responsibility seriously to weigh the evidence and determine whether the president’s actions were impeachable. Unfortunately the evidence in the intelligence and judiciary reports leaves us with no choice but to impeach the president.”

Others characterised the impeachment as an attack on conservatives who had voted for Mr Trump in 2016. Beginning his intervention with a quotation from the Bible, Louisiana Republican Clay Higgins denounced the process.

“America is being severely injured by this betrayal, by this unjust and weaponised impeachment, brought upon us by the same socialists who threaten unborn life in the womb, who threaten First Amendment rights of conservatives,” he said.

Echoing Mr Trump’s claim in a letter to Ms Pelosi on the eve of the vote which claimed that the victims of the Salem witch trials had been afforded more due process than him, Republican Barry Loudermilk also used an example from history to suggest Mr Trump had been mistreated.

“When Jesus was falsely accused of treason, Pontius Pilate gave Jesus the opportunity to face his accusers. During that sham trial, Pontius Pilate afforded more rights to Jesus than the Democrats have afforded this president in this process.”

Wednesday’s vote took place as a new poll found that slightly more Americans favour impeachment than oppose it. Forty-nine per cent of Americans in an ABC-Washington Post poll said that Mr Trump should be impeached and removed from office, with 46 per cent opposed.

The issue also divides American broadly along party lines. Eighty-five per cent of Democrats believe that Mr Trump should be impeached and removed while 86 per cent of Republicans are opposed.