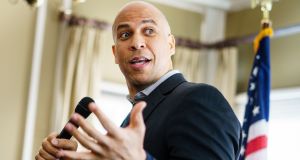 Senator Cory Booker of New Jersey has announced he is running for the Democratic presidential nomination to challenge US president Donald Trump in 2020, saying the United States needs to be able to see its leaders and “feel pride, not shame.”

Mr Booker, 49, a senator since 2013 and the former mayor of Newark, joins a growing Democratic primary field including fellow senators Elizabeth Warren of Massachusetts and Kamala Harris of California.

In a tweet and video sent Friday to supporters, Mr Booker said he could serve as a unifying force in the Democratic Party and help the US draw on a history “defined by collective action” and led by those who “linked arms to challenge and change it.”

Mr Booker took aim at the Trump administration’s detention of migrants at the southern border and the separation of children from their parents.

“I believe that we can build a country where no one is forgotten, no one is left behind; where parents can put food on the table; where there are good-paying jobs with good benefits in every neighborhood,” Mr Booker said. He called for a country “where our criminal justice system keeps us safe, instead of shuffling more children into cages and coffins; where we see the faces of our leaders on television and feel pride, not shame.”

He would be the nation’s second black president and would face at least one other African- American opponent, Ms Harris, in a party where black voters have been decisive in picking the presidential nominee in the last two open contests – Hillary Clinton in 2016, and Barack Obama in 2008.

Mr Booker, New Jersey’s first black senator, draws comparisons with Mr Obama, who arrived in the Senate in 2005 to immediate buzz about Oval Office ambitions. Yet at a time of increasing energy in the Democratic Party’s progressive wing, Mr Booker will be challenged by other candidates who are more strongly embraced on the left, including Ms Warren and, potentially, Bernie Sanders of Vermont if he decides to run.

Mr Booker has been working to gain favor within his party, raising more than $7 million for federal, state and local candidates and parties before the 2018 elections, according to data compiled by his office. He campaigned for fellow Democrats in 24 states, including early presidential caucus and primary states Iowa, New Hampshire and South Carolina.

Mr Booker’s strengths include a charismatic persona, a record of taking on Mr Trump, the potential to appeal to minority and young voters, and a reputation for strong fundraising. In the 2013 special election when he first won his Senate seat, and a subsequent 2014 bid for a full term, Mr Booker overwhelmed his Republican Senate opponents with a large campaign war chest. In 2014 alone, he raised $17.7 million while GOP rival Jeff Bell brought in only $570,000.

In the Senate, Mr Booker has pursued a largely progressive agenda. He proposed replacing private health insurance with a government-run plan known as Medicare for all, legalising marijuana, and requiring publicly traded companies that use profits for stock buybacks to pay a similar amount to employees as a “worker dividend.” He sought to address a racial wealth gap by giving all children government-funded savings accounts, with lower-income kids getting higher payments.

Mr Booker in December 2017 circulated an online petition calling on Mr Trump to resign over claims of sexual harassment by several women. “We must hold members of both parties to the same standard, and that standard should apply all the way to the top,” Mr Booker said in his petition.

He helped lead an unsuccessful fight to defeat Mr Trump’s nomination of then-Alabama Senator Jeff Sessions as attorney general. Mr Booker said Mr Sessions had a long history of hostility toward minorities and testified against Mr Sessions at his confirmation hearing.

Mr Booker also has worked to create bipartisan relationships. He held a three-hour dinner in 2013 with GOP Senator Ted Cruz of Texas to discuss constitutional law. He worked with Republicans on legislation overhauling US sentencing standards, and on a thus far unsuccessful bill to protect Special Counsel Robert Mueller’s investigation of Mr Trump’s 2016 campaign and Russian election interference.

Booker was born in 1969 to parents who were IBM executives. He attended Stanford University, where he played on the football team and was elected senior class president. After attending Oxford as a Rhodes scholar, Mr Booker received a law degree from Yale.

He won election to the Newark City Council in 1998 and became mayor in 2006 on a promise to revitalize one of the nation’s more troubled cities. He balanced the budget, bolstered investment in mass transit, and persuaded Facebook founder Mark Zuckerberg to donate $100 million to improve Newark’s schools. Yet his efforts to revamp the schools had mixed results.

His reputation took on a star quality after he rescued a neighbor from a burning house in 2012 and shoveled an elderly woman’s sidewalk when a city plow didn’t show up. Positive coverage of Newark’s improvements elevated his profile, as did his friendships with Mr Obama and celebrities including actor Ben Affleck and talk show host Oprah Winfrey. – Bloomberg