Venezuela braced for another wave of anti-Maduro protests 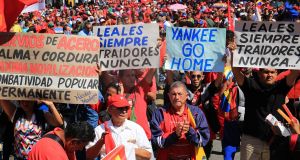 Mass street protests designed to drive Nicolás Maduro out of office and into exile will sweep cities across Venezuela again on Saturday as Hugo Chávez’s successor fights for his political life and the future of their leftist Bolivarian revolution.

Mr Maduro, who was first elected after Chávez’s death in 2013 and returned to office last year in a vote widely regarded as manipulated, has overseen a ruinous slide in the South American country’s fortunes.

Millions of citizens have fled overseas to escape hyperinflation, soaring crime and crippling shortages of food, medicine and healthcare.

A sudden and unexpected challenge has emerged this year in the form of Juan Guaidó, a hitherto little-known opposition politician who shot to fame on January 23rd when he declared himself Venezuela’s rightful interim president.

Since then, Mr Guaidó – whose growing coalition of international backers now includes the US, Australia, Brazil, Canada, Colombia and the European parliament – has for many Venezuelans become a desperately-sought symbol of change.

“We’re happy because at last people feel hope,” said Adriana Gregori, a 20-year-old student at Caracas’s Central University of Venezuela who plans to take to the streets of the capital on Saturday. “People believe that the international community is backing us and the government is increasingly isolated.”

Jorger Maita, an activist from Mr Guaidó’s party, Voluntad Popular (Popular Will), said their movement “had managed to give hope back to the whole of Venezuela – and this was so important because citizens had become demotivated”.

“We want the usurpation to end, a transition government to be formed and soon to be able to vote in free elections,” Mr Maita added, quoting Mr Guaidó’s three-point road map for Venezuela’s political future.

Facing an unprecedented challenge to his rule, Mr Maduro has sought to project power and placidity. In daily appearances on state television and social media he has appeared going jogging with troops, dancing with his wife, praying and presenting diplomatic credentials to incoming ambassadors from Africa and south-east Asia.

“WE ARE INDESTRUCTIBLE!” Mr Maduro tweeted on Wednesday alongside a video in which he pounds a pair of conga drums with both hands.

But on the streets there is a palpable sense of apprehension. Armoured anti-riot vehicles can be seen speeding along highways outside the capital. Mr Maduro’s reported decision to sell a fifth of Venezuela’s gold reserves to the United Arab Emirates to shore up his cash-strapped regime also suggests growing nervousness at the top.

Mr Maduro and members of his inner circle paint Mr Guaidó as a puppet of Donald Trump’s White House and part of a US-backed “coup” attempt designed to rout Chavez’s leftist dream.

At a Socialist party rally this week, Delcy Rodriguez, Venezuela’s vice-president, accused Mr Trump, US vice-president Mike Pence, and the national security adviser, John Bolton, of conspiring to topple her leader in order to capture the country’s natural resources.

“Each of them – without exception – has said they are coming for Venezuela’s oil,” Ms Rodriguez said.

“And what is our response? Get your Yankee hands off the oil industry!”

Those accusations have been bolstered by admissions from top US officials that oil is a key part of their calculations in siding with Mr Guaidó.

“It will make a big difference to the US economically if we could have American oil companies really invest in and produce the oil capabilities in Venezuela,” Mr Bolton told Fox News this week in comments that were seized upon by Mr Maduro’s propaganda channels as proof of Mr Trump’s malign intent.

Geoff Ramsey, a Venezuela specialist from the Washington Office on Latin America, said: “This administration has been woefully tone deaf in its handling of the Venezuela crisis.”

Mr Ramsey pointed to Elliott Abrams as Trump’s representative on Venezuela as another misstep. “Appointing a special envoy who has a chequered past of lying to Congress, for funnelling weapons to death squads in Central America – I don’t think that was a particularly smart move either,” Mr Ramsey added.

Mr Ramsey said Saturday’s marches would ratchet up pressure on Mr Maduro and remind him “that this renewed momentum isn’t likely to go away any time soon”. But they also represented a test.

“It has been over a week since Guaidó swore himself in as president and the longer this draws on the more it highlights the gap between democratic legitimacy and de facto power.

“There is a real challenge here for the opposition: how do you sustain momentum and create the sense that this is going somewhere when Maduro’s hold on the levers of power doesn’t appear to be weakened?”

Eva Golinger, an American former Chávez confidant who once called herself “a soldier” of his revolution, said she was concerned violence during Saturday’s protests could make a volatile situation escalate.

“There could be a confrontation and the US could use it as an excuse. It seems to me the US is looking for an excuse to go in with military force to take Maduro out,” said Ms Golinger, the author of a recent book about her years in Venezuela called Confidante of ‘Tyrants’.

“That will result in a bloody confrontation because no one is going to just go down on their knees and surrender,” Ms Golinger warned. “There are people who are going to fight back – and they have a lot of weapons.”

On Friday Mr Bolton insisted military action was not imminent and said the US was focused on a “peaceful transfer of power”. – Guardian