Stone pleads not guilty to charges from Mueller investigation 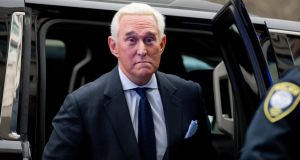 Roger Stone has been released on bail on a $250,000 bond, and his movements have been restricted to Florida, New York and Washington DC. Photograph: Michael Reynolds/EPA

Roger Stone, a long time ally of US president Donald Trump, has pleaded not guilty at a court appearance in Washington to criminal charges relating to special counsel Robert Mueller’s Russia investigation.

Mr Stone, who was arrested by the FBI last Friday at his home in Florida, has been charged with seven counts including that he lied to Congress about his connections with WikiLeaks.

Mr Stone is alleged to have been a conduit between Mr Trump’s campaign team and WikiLeaks, which published damaging information about rival candidate Hillary Clinton in the months leading up to the 2016 presidential election.

Mr Stone, a colourful figure who made a Nixonian “double V” salute on exiting his court hearing in Florida on Friday, was more subdued following his appearance before magistrate Deborah A Robinson on Tuesday.

He declined to take questions from reporters, replying “I feel fine” to one reporter’s question. He has been released on bail on a $250,000 bond, and his movements have been restricted to Florida, New York and Washington DC.

Mr Stone’s appearance in court took place a day after acting attorney general Matthew Whitaker said he believed that special counsel Robert Mueller’s investigation into Russian interference in the 2016 election is “close to conclusion”. The comments were a rare public intervention about the ongoing investigation from the 49-year-old lawyer, who took over from Jeff Sessions after he was fired as attorney general by Mr Trump in November.

Mr Sessions’s proposed successor, William Barr, has yet to be confirmed by the Senate. A vote by the Senate judiciary committee on his nomination has been delayed by a week as Democrats request further clarification about whether he will publish the Mueller investigation fully when it is completed.

Nonetheless, Mr Barr is expected to be confirmed by the Senate next week. As the nation’s top justice official he will have ultimate authority over the Mueller investigation when it has been completed.

As Mr Trump prepares to deliver the State of the Union address next Tuesday to a joint session of Congress, Democrats have announced that Stacey Abrams, who unsuccessfully contested the gubernatorial race in Georgia in November, will deliver the Democratic Party’s official response. Ms Abrams is seen as a rising star within the Democrats and may run for a Senate seat in Georgia in 2020.

Meanwhile, the country’s top intelligence chiefs delivered a stark report to Congress on Tuesday about the global threats facing the United States, including assessments that appeared to contradict Mr Trump. North Korea is “unlikely to give up” all of its nuclear stockpiles, according to the annual report that is provided to members of Congress each year.

Director of national intelligence Dan Coats told the Senate intelligence committee as he presented the results that “we currently assess North Korea will seek to retain its WMD [weapons of mass destruction] capability and is unlikely to completely give up its nuclear weapons and production capability”.

His comments come ahead of a planned second summit between Mr Trump and North Korean leader Kim Jong-un next month. Mr Trump has claimed that North Korea is committed to moving towards denuclearisation, but Mr Coats told the committee that the country’s leaders “ultimately view nuclear weapons as critical to regime survival”.

This message was reinforced by CIA director Gina Haspel. While welcoming the recent dialogue between the United States and North Korea, she said Pyongyang needed to fully disclose its nuclear missile programme, noting that its government was “committed to developing a long-range nuclear-armed missile that would pose a direct threat to the United States”.

Mr Coats also appeared to undermine Mr Trump’s claim that that Islamic State had been defeated, noting that the terrorist group was “intent on resurging and still commands thousands of fighters in Iraq and Syria”.