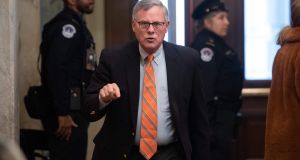 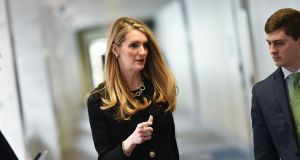 US Senator Kelly Loeffler is facing calls to resign after it was reported that she sold stock holdings before the Covid-19 epidemic crashed markets. Photograph: Mandel Ngan/AFP/Getty Images

Two Republican senators faced calls to resign on Friday over media reports they sold substantial amounts of stock before the global coronavirus-induced market meltdown after receiving private briefings on the outbreak.

Senate Intelligence Committee chairman Richard Burr sold between $628,000 (€ 587,000) and $1.7 million (€ 1.5m) worth of stock on February 13th, in 33 separate transactions, after offering public assurances the government was ready to battle the virus, according to nonprofit investigative journalism group ProPublica.

Mr Burr’s committee has been receiving daily updates on the outbreak.

Two weeks after the stock sale, the North Carolina Republican told a luncheon on Capitol Hill that the coronavirus was much more aggressive in its transmission “than anything that we have seen in recent history,” according to a recording obtained by National Public Radio.

Mr Burr issued a statement Friday morning saying he relied only on public news reports to guide his decision on the February 13th stock sale.

“Understanding the assumption many could make in hindsight however, I spoke this morning with the chairman of the Senate Ethics Committee and asked him to open a complete review of the matter with full transparency,” Mr Burr said.

Republican Senator Kelly Loeffler sold $1.28 million (€ 1.19m) to $3.1 million (€ 2.9m) in stocks from January 24th through mid-February in 29 transactions, two of which were purchases, according to The Daily Beast. The report said the sales began on the day her health committee hosted a private coronavirus briefing for senators.

Ms Loeffler wrote overnight on Twitter that she was informed of the transactions three weeks after they occurred.

But by early Friday, critics on both ends of the political spectrum were calling on both lawmakers to consider resigning.

Mr Burr, who is in his third term, as a senator, has said he will not seek re-election in 2022. Ms Loeffler - who was appointed to her seat by Georgia’s Republican governor, Brian Kemp, after the resignation of Johnny Isakson - is running for re-election to complete the remaining two years of Mr Isakson’s term.

“It is stomach-churning that the first thoughts these Senators had to a dire & classified #COVID briefing was how to profit off this crisis. They didn’t mobilize to help families, or prep response. They dumped stock,” Democratic Representative Alexandria Ocasio-Cortez tweeted.

The “#COVID” hashtag referred to Covid-19, the respiratory illness caused by the coronavirus.

Tucker Carlson, a conservative Fox News commentator, told his viewers on Thursday night: “Maybe there is an honest explanation for what (Burr) did. If there is, he should share it with the rest of us immediately. Otherwise, he must resign from the Senate and face prosecution for insider trading.”

The controversy swirled as senators from both parties were due to meet with Trump administration officials to try to devise a rescue plan for an economy reeling from the coronavirus, after Republicans made a $1 trillion opening bid.

The massive Republican package unveiled on Thursday includes checks of up to $1,200 each for many Americans, and hundreds of billions of dollars in loans for small businesses and industries. It also would allow Americans a breather on filing their income taxes until July. They are normally due on April 15th.

Senate Majority Leader Mitch McConnell has vowed the Senate would not adjourn until it had taken action, and sent a measure to the Democratic-led House of Representatives, but any vote was probably days away.

Democrats said they were ready to talk but were also wary, noting they had not been involved in drafting the plan. – Reuters