Prince Harry and Meghan Markle: a timeline of their highs and woes

From a blind date to a war with the tabloids, the couple have had an eventful three years 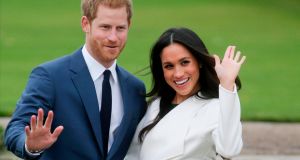 Prince Harry and Meghan Markle after the announcement of their engagement in November 2017. Photograph: Daniel Leal-Olivas/AFP via Getty Images

Prince Harry and Meghan Markle have become renowned for their swift progress through life’s milestones. It is only three years since the prince was set up on a blind date with the American TV actor. Now, married with child, the pair have set out on a fresh path together, announcing a degree of separation from the royal family and their intention to make their own way as a financially independent family.

These are the milestones – happy and otherwise – that led up to Wednesday’s shock announcement.

Set up on a blind date by a mutual friend in London, the two hit it off immediately and bond over their shared interest in charity work. That night they open their diaries to schedule more time together – including a secret camping holiday in Botswana.

Harry’s communications secretary issues an official public statement, condemning the British press’s torment of his girlfriend. The statement marks the beginning of the Sussexes’ rising acrimony with the press, and Harry’s personal disappointment “that he has not been able to protect her”.

“The past week has seen a line crossed. His girlfriend, Meghan Markle, has been subject to a wave of abuse and harassment,” the statement read. “Some of this has been very public – the smear on the front page of a national newspaper; the racial undertones of comment pieces; and the outright sexism and racism of social media trolls and web article comments.

Meghan appears on the cover of Vanity Fair magazine, telling the magazine the intense scrutiny that comes with being Harry’s girlfriend can be “challenging”.

“It has its challenges, and it comes in waves – some days it can feel more challenging than others,” she said. “And right out of the gate it was surprising the way things changed. But I still have this support system all around me, and, of course, my boyfriend’s support.”

Harry and Meghan announce their engagement. In an interview with the BBC, Meghan describes the couple’s journey as “authentic and organic” and says not following the British press meant she learnt everything she knows about Harry from Harry himself.

Meghan says she was “naive” about what it would be like to be involved with a member of the royal family.

Harry says he tried to warn his future wife “as much as possible”, but the couple were “totally surprised” by the intense interest and scrutiny.

“After many months of reflection and internal discussions, we have chosen to make a transition this year in starting to carve out a progressive new role within this institution. We intend to step back as ‘senior’ members of the Royal Family and work to become financially independent, while continuing to fully support Her Majesty The Queen. It is with your encouragement, particularly over the last few years, that we feel prepared to make this adjustment. We now plan to balance our time between the United Kingdom and North America, continuing to honour our duty to The Queen, the Commonwealth, and our patronages. This geographic balance will enable us to raise our son with an appreciation for the royal tradition into which he was born, while also providing our family with the space to focus on the next chapter, including the launch of our new charitable entity. We look forward to sharing the full details of this exciting next step in due course, as we continue to collaborate with Her Majesty The Queen, The Prince of Wales, The Duke of Cambridge and all relevant parties. Until then, please accept our deepest thanks for your continued support.” - The Duke and Duchess of Sussex For more information, please visit sussexroyal.com (link in bio) Image © PA

“We were hit so hard at the beginning with a lot of mistruths,” Meghan tells the BBC.

The couple marry at Windsor castle, becoming the duke and duchess of Sussex. Meghan’s father is not in attendance at the wedding. Meghan walks herself down the aisle – guided at the end by Prince Charles.

The couple begin a tour of the commonwealth and announce Meghan is pregnant with their first child. In the coming months, Meghan is accused by the tabloid press of “flaunting” her baby bump and touching her stomach excessively – described as “virtue signalling” by some.

“She is not allowed to have those feelings, though, because her job is to breed in captivity,” wrote the Guardian’s Suzanne Moore, condemning the criticism of Meghan. “The duchess of Sussex is public property as far as the media are concerned . . . the subtext is that she is devious.”

The couple split from Kensington palace and rumours of a rift between Harry and Prince William emerge. More than £2.4 million (€2.8 million) of public money is spent on upgrading the Sussexes’ new official residence, Frogmore Cottage.

The couple’s first child, Archie, is born. At a later press call, the couple begin showing signs they may be planning to distance themselves from the monarchy when they announce that their son will not have a title, and will instead be referred to as “Master”.

The couple announce they intend to split from their combined charity with the Cambridges, and start their own charity, Sussex Royal.

The Sussexes are accused of being hypocrites and take a battering from the press for using private jets on holidays, weeks after Harry announced the couple planned to have only two children for the sake of the planet.

The Sussexes tour South Africa, where they take part in an intimate documentary and reveal the strain and pressure of their life. Meghan says her friends warned her not to marry Harry because of the British tabloids.

“I really tried to adopt this sensibility of the British stiff upper lip, but I think that what that does internally is probably really damaging. I never thought this would be easy, but I thought it would be fair,” Meghan says.

“I will not be bullied into playing a game that killed my mum,” Harry says, saying the couple have toyed with the idea of relocating at least part-time to Africa. “For me and my wife of course there’s a lot of stuff that hurts . . . especially when the majority of it is untrue.”

The duchess of Sussex sues the publisher of the Mail on Sunday after the newspaper published a handwritten letter she had sent to her estranged father.

At the same time, Prince Harry launches an unprecedented attack on the British tabloid press and its treatment of his wife, saying he could no longer be a “silent witness to her private suffering”.

He wrote: “There comes a point when the only thing to do is to stand up to this behaviour, because it destroys people and destroys lives.

“Though this action may not be the safe one, it is the right one . . . I’ve seen what happens when someone I love is commoditised to the point that they are no longer treated or seen as a real person.

“I lost my mother and now I watch my wife falling victim to the same powerful forces.”

The couple announce they will not spend Christmas with other members of the royal family, and will instead take a six-week holiday in Canada.

The couple announce they intend to step back as senior members of the royal family, and become financially independent, while splitting their time between the UK and North America. – Guardian