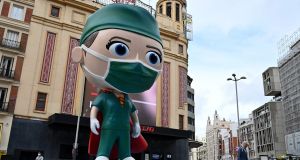 A six-metre statue of a “superhealthworker” in Madrid to pay tribute to those fighting coronavirus. Photograph: Gabriel Bouys/AFP via Getty Images

Members of the armed forces are due to be deployed in Madrid in the coming days as local authorities plan to extend a partial lockdown due to rising cases of coronavirus.

Spain has the highest infection rate in Europe with 320 cases per 100,000 inhabitants, according to the European Centre for Disease Prevention and Control. The same data showed that Ireland had a rate of 72 infections per 100,000 people.

Within Spain, Madrid and its surrounding region are the worst-affected area, with many zones there seeing an infection rate that exceeds 1,000 cases per 100,000 inhabitants.

In an effort to reverse that trend the local government introduced restrictions in 37 districts of the Madrid region at the beginning of this week, affecting 850,000 people. Movement in and out of those areas has been restricted, bars and restaurants must close early and reduce their customer limit and parks have been closed.

Many people in those districts, the majority of which are low-income areas of southern Madrid, complained that they were being discriminated against when the measures were announced.

However, on Friday the regional government is expected to announce the extension of the restrictions to other parts of Madrid where infections rates are notably high, as of Monday.

“Some tough weeks are ahead of us in Madrid,” said health minister Salvador Illa, who has been co-ordinating with the local authorities. “Therefore we have to act with determination and take control of the pandemic in the region.”

Members of the armed forces are due to arrive in Madrid on Monday to help with disinfection and Covid-19 testing. The local government has also requested the deployment of extra police to help enforce the new regulations. Members of the military have already been helping with tracing in Madrid and other regions throughout this month.

For the moment the regional government of Madrid has ruled out the possibility of introducing a full lockdown of the kind the national administration implemented between March and June.

In Catalonia the regional government has reduced the limit on social gatherings from 10 people to six, a measure already in place in Madrid.

With infections still rising the healthcare system is feeling the pressure. Experts have warned that the intensive care units of many hospitals in the Madrid region and some other regions are at full capacity.

Although the start of the school year has been delayed and staggered according to regions and age groups, 2,852 classes have already been sent home to self-quarantine. However, education minister Isabel Celaá underlined that this number represents less then 1 per cent of total school classes in Spain.

“Schools are places of early detection, not of contagion,” she said. “[But] a lot of care has to be taken with social activities, on leaving the school gates.”