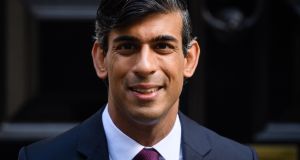 Chancellor of the exchequer Rishi Sunak: New measure subsidises the wages of employees who work at least a third of their normal hours. Photograph: Leon Neal/Getty

Britain’s chancellor of the exchequer has announced a new wage subsidy scheme as the country recorded its highest daily number of coronavirus cases since the pandemic began. Rishi Sunak said the scheme, which replaces the furlough which runs until the end of October, is designed to save “viable” jobs by helping employers to keep more people working fewer hours.

It is less generous, less expensive and covers fewer people than the furlough scheme, which paid 80 per cent of wages even if an employee worked no hours.

“The furlough was the right policy at the time, but as the economy reopens it is fundamentally wrong to hold people in jobs that only exist inside the furlough. We need to create new opportunities and allow the economy to move forward. That means supporting people in viable jobs which provide genuine security,” Mr Sunak told the House of Commons.

At a press conference in Downing Street later, Mr Sunak declined to say which jobs would be viable as Britain settled down to living with coronavirus as a fact of life well into next year. He hinted at tax rises in the future to pay for the cost of supports to business and workers and suggested that the state could become smaller after the coronavirus crisis was over.

“We need to have an eye on our public finances and make sure we stay in a strong and sustainable position. I will have to make some of the difficult decisions in the future as we get back on a path to sustainability,” he said.

“The state being as nimble and agile as possible means it doesn’t have to raise as much tax revenue from people and people can keep more of the money they own. That is in general a good thing. As we get through this we can get back to a normal situation.”

The Confederation of British Industry (CBI), which represents business, welcomed the chancellor’s package of measures, which included an extension of business loans and of a low VAT rate for the hospitality industry. But Labour’s shadow chancellor, Anneliese Dodds, said the government’s failure to deal with the health crisis meant that Britain was experiencing the highest coronavirus death rate in Europe and the deepest recession.

There were 6,634 new cases recorded on Thursday, up from 6,178 the day before and almost twice as many as a week ago. Yvonne Doyle, medical director at Public Health England, described the figures as a stark warning.

“The signals are clear. Positivity rates are rising across all age groups and we’re continuing to see spikes in rates of admission to hospital and critical care,” she said.