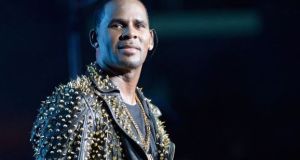 Surviving R Kelly: The singer denies all the allegations levelled against him. Photograph: Earl Gibson III/Getty

US R&B singer R Kelly has been dropped by his record company, Sony’s RCA, in the music industry’s highest-profile casualty of the #MeToo era.

RCA’s agreement to part ways with Robert Kelly (52), confirmed by a person briefed on the move who declined to be identified because the deal was confidential, came after weeks of protests.

A recent television documentary, Surviving R Kelly, drew wide attention for its visceral testimonials by women who said that, as underage girls, they had been lured into sexual relationships with Kelly, and abused by him mentally and physically.

The documentary series chronicled decades of allegations against Kelly, including that he operates a so-called sex cult in which he physically and emotionally abuses women and keeps them from their families.

Kelly’s representatives say that the women who live and travel with him are doing so voluntarily and that he has not abused any of them.

Mr Greenberg told US television show Dateline that every woman who had come forward to accuse Kelly of misconduct was lying.

Activists who had been calling for Kelly’s dismissal cheered RCA’s decision to drop him, while still criticizing the label for its slow pace, and they pushed the entertainment industry to punish Kelly further.

“After years of profiting from R Kelly, despite their knowledge of his sexual abuse of black girls, Sony’s RCA is finally acting,” Arisha Hatch of the group Color of Change said in a statement.

Accusations of misconduct by Kelly date to the mid-1990s, when it was revealed that, at 27, he secretly married his 15-year-old protégée, the singer Aaliyah; their marriage certificate falsely listed her age as 18.

Lurid reports of misconduct followed, including accounts from women who said Kelly had sex with them when they were as young as 15.

Kelly has denied abusing or mistreating any women.

Kelly is not facing criminal charges, but prosecutors in Atlanta and Chicago, wherethe singer has had homes, began looking into accusations against him after the documentary aired.

Don Russell, who identified himself as the “top adviser” to Kelly, said other labels were interested in signing Kelly, though he declined to identify them.

Kelly has been dogged for years by accusations, but has never been convicted of a crime.

He was acquitted in Chicago on child pornography charges in 2008, in a case that involved a tape that prosecutors said showed him having sex with a 13-year-old girl.

But the girl in the video did not testify and Kelly’s lawyers argued that her identity could not be proved.

He has also settled lawsuits against him going back to the 1990s.

Public opinion began to turn against Kelly again in 2017, after an investigation published by BuzzFeed News said he had been holding women against their will in an abusive “cult”.

Online outrage over that reporting led to a social media campaign, #MuteRKelly.

Terms of Kelly’s exit deal, including what, if anything, RCA paid him to terminate the contract, were not disclosed.

According to the person briefed on the talks, RCA had been discussing the move for months with his legal team, well before the release of the documentary, but after the #MuteRKelly movement had gained momentum.

Online music streaming service Spotify have removed Kelly from all playlists in light of accusations made against him. – New York Times

When the Lights Go Out: Changing climate of a marriage
4