Sarah Thomas, 37, is the first person to swim across the English Channel four times in a row, completing what ended up being a 210km journey after more than 54 hours of swimming. Video: Channel Swimming Academy 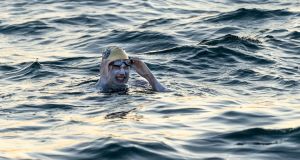 Sarah Thomas, 37, who has become the first person to swim across the English Channel four times in a row, completing the feat of endurance at about 6.30am after more than 54 hours of swimming. Photograph: Jon Washer/PA

An American cancer survivor has achieved the “extraordinary” feat of becoming the first person to swim across the English Channel four times non-stop. Sarah Thomas, 37, said she felt “really tired” and “stunned” after completing the epic challenge in just over 54 hours.

The swimmer from Colorado was cheered to shore at Dover and handed champagne and chocolates as her remarkable swim ended at about 6.30am on Tuesday. Her achievement, described by supporters as “mind-blowing”, comes just a year after Thomas completed treatment for breast cancer. Writing ahead of her challenge, she dedicated the swim to “to all the survivors out there”.

Afterwards, Thomas told BBC Breakfast she felt “stunned” and “numb”. The hoarse-sounding swimmer said: “I’m really tired and I’m losing my voice from all the saltwater.”

Asked what the worst part of her challenge was, she said: “Probably dealing with the saltwater over four days, or two days, it really hurts your throat, your mouth and your tongue.”

She praised her support team for “helping me stay strong”, adding that she was “very prepared” for the weather, currents and cold water.

Thomas said she was kept fuelled by electrolyte and caffeine-filled drinks as she navigated past “a lot of jellyfish” during her swim. She admitted to feeling “pretty out of it” and was hoping to “sleep the rest of the day”.

The swimmer added: “I feel just mostly stunned right now, I just can’t believe that we did it.”

Elaine Howley, a member of Thomas’s support team, said the swimmer had returned to her accommodation near Folkestone with her family to sleep and recuperate. Describing her friend’s achievement, she said: “It’s unfathomable, it’s super human, it’s just extraordinary. I’m not sure there are enough superlatives out there to explain what this meant on many different levels.”

The total official crossing distance was 84 miles, but Thomas likely ended up swimming further due to currents and tides, with the latter shifting unexpectedly in the final stages of the challenge. – PA