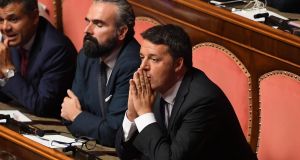 Former Italian prime minister Matteo Renzi (right): move is a gamble for the 44-year-old senator who is appealing to the political centre at a time when his popularity is low. Photograph: Maurizio Brambatti/EPA

Italy’s former prime minister Matteo Renzi has announced he is splitting from the centre-left Democratic Party to set up a new centrist political movement, shifting the balance of power inside the country’s fragile two-week old coalition government.

Mr Renzi said he will continue to support the coalition between the Democratic Party (PD) and the Five Star Movement but expected to take about 30 MPs into his new party, weakening the influence of PD leader Nicola Zingaretti.

Splitting from Italy’s Democratic Party is a gamble for the 44-year-old senator who is appealing to the political centre at a time when his popularity is low, and polls show a majority of voters still split their support between the anti-immigration League and anti-establishment Five Star Movement.

Mr Renzi spoke with prime minister Giuseppe Conte in a phone call on Monday evening in which he said he believed a new party would help broaden the appeal of the current government.

“I have decided to leave the PD and build together with others a new house to do politics in a different way,” Mr Renzi wrote in a Facebook post. “After seven years of friendly fire I think we should take note that our values, our ideas, our dreams can not be the subject of daily internal quarrels.”

Mr Renzi said in an interview with La Repubblica that he was not trying to undermine Mr Zingaretti. “I do not have a personal problem with Zingaretti, and nor does he have one with me,” he said.

Mr Zingaretti reacted to the news of the split by calling it “an error”. “Now let’s think about the future of Italians, work, environment, businesses, schools, investments”, he wrote on Twitter on Tuesday.

A survey of political pollsters conducted by the Corriere della Sera newspaper predicted that a new Renzi-led centrist party could win the support of between 3-8 per cent of voters.

The split within the PD has been heavily criticised by party figures, who argue it will sow divisions and heighten the risk of new elections that would probably see the return to power of the League’s Matteo Salvini. Enrico Letta, another ex-PD prime minister and rival of Mr Renzi, said splitting the party “was without logic” and called for “unity and humility”.

Mr Renzi, who has low approval ratings among Italian voters but retains influence inside the PD, had been the driving force in calling for a tie-up between the PD and the Five Star Movement following the collapse of the last coalition government in August.

Mr Renzi is expected to formally outline his new party’s platform at a meeting of supporters and lawmakers in the middle of October. His new party will be created in Italy’s lower house, while inside the Italian senate it will sit inside the so-called “mixed group” because new parties are unable to be formed outside of elections.

The former mayor of Florence, who became Italy’s youngest prime minister in 2014, earned a reputation for political ruthlessness after ousting his party colleague Enrico Letta to become leader of the country having reassured him publicly that he would not. – Copyright The Financial Times Limited 2019