Legality of prorogation must be challenged to prevent wrongful triggering, says former PM 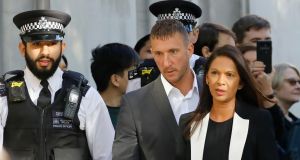 Anti-Brexit campaigner Gina Miller arrives at the supreme court in central London, on the second day of the hearing into the decision by the UK government to prorogue parliament. Photograph: Tolga Akmen/AFP

The courts should be able to review the legality of Boris Johnson’s decision to suspend parliament for five weeks or there would be nothing to prevent a prorogation “in any circumstances”, former Tory prime minister John Major has claimed in one of the most important constitutional cases heard in the UK.

Sir John is among those intervening in the two appeals before the supreme court, which is considering whether Mr Johnson acted lawfully in advising the queen to prorogue parliament this month.

A ruling that effectively finds that the prime minister misled the monarch would spell political disaster for the Johnson government, which came under attack in the supreme court on Wednesday where it was alleged that the “mother of parliaments had been shut down by the father of lies”.

Opposition MPs and anti-Brexit campaigners have argued that Mr Johnson suspended parliament for an unusually long period to limit the time MPs would have to challenge his Brexit strategy before the UK was due to leave the EU on October 31st.

The supreme court is considering two conflicting court decisions from the English and Scottish courts. The highest court in Scotland, which has a separate legal system, ruled last week that Mr Johnson’s advice on prorogation was unlawful and “clandestine” in a case brought by more than 70 parliamentarians.

By contrast, the high court in London ruled in favour of the government in a case brought by anti-Brexit campaigner Gina Miller which found her case was “high policy and politics” and not reviewable by the courts under Britain’s largely unwritten, partially codified constitution.

On Wednesday Aidan O’Neill QC, barrister for the 70 parliamentarians in the Scottish case, attacked Mr Johnson and the government in his submissions and claimed that the “mother of parliaments had been shut down by the father of lies”. He called on the supreme court to “stand up for parliament” and urged the courts to intervene as the “only constitutional actor still standing” after parliament had been shut down.

He also suggested the government had used prorogation as a “magic word to do whatever they like” until they were “expressly and explicitly stopped”.

“The government is showing itself unworthy of our trust as it uses the powers of office which is corrosive of the constitution and destructive of the system of parliamentary democracy,” Mr O’Neill claimed adding it could not be assumed this government would engage in “high politics” as opposed to “low, dishonest, dirty tricks”.

In his written submissions to the supreme court, Sir John argued the issue of prorogation should be able to be considered by the courts because otherwise “the consequence would be that there is nothing in law to prevent the prime minister from proroguing parliament in any circumstances or for any reason”.

Sir John, whose barrister will make legal arguments on his behalf on Thursday, also claimed the absence of sworn witness statements to support government documents was “deeply concerning”.

The UK government argued on Wednesday the prorogation of parliament should not be considered by the courts because it is a political not a legal issue and judges should avoid “entering the political arena” and intruding into “constitutionally inappropriate” territory.

“The exercise of the particular power is appropriate for political – and not judicial – resolution and control,” James Eadie QC, acting for the government, told the justices.

The supreme court will hear supporting arguments by other interveners, including the Scottish and Welsh governments and Belfast victims campaigner Raymond McCord. A ruling is not expected until later this week at the earliest.– Copyright The Financial Times Limited 2019