Trump faces outcry over claim he deliberately ‘played down’ coronavirus

US Wrap: President flies to battleground state of Michigan a day after rival Joe Biden 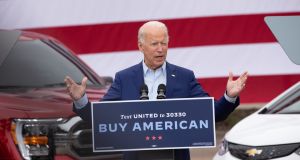 US president Donald Trump flies to the key battleground state of Michigan on Thursday amid outcry over comments he made to veteran journalist Bob Woodward suggesting he deliberately played down the seriousness of the coronavirus pandemic.

In a series of interviews conducted earlier this year for Mr Woodward’s new book, Mr Trump described the virus as “deadly” at the same time as he was assuring the American public that there was no threat from the virus.

“You just breathe the air and that’s how it’s passed,” the president said in an interview on February 7th. “So that’s a very tricky one. That’s a very delicate one. It’s also more deadly than even your strenuous flu.”

A month later, he said that he “wanted to always play it down. I still like playing it down, because I don’t want to create a panic.”

Speaking in the White House on Wednesday, Mr Trump defended his comments, which were recorded by Mr Woodward. Mr Trump said that while he “perhaps” misled the public on Covid, this was because he did not want to cause panic. “We have to show leadership,” he said.

Mr Trump was speaking as he announced a list of potential court appointees he would nominate if elected for a second term, including current senators Ted Cruz and Tom Cotton.

Mr Trump’s presidential rival Joe Biden excoriated the president as news of the new revelations emerged as he arrived in Michigan to campaign.

“On the day that we hit 190,000 dead . . . we just learned that the president of the United States has admitted on tape in February that he knew about Covid-19. He knew how deadly it was . . . he knew, and purposely played it down,” he said.

“He lied to the American people. He had the information. He knew how dangerous it was . . . He failed to do his job on purpose.

“It was a life-and-death betrayal of the American people,” Mr Biden said. “It’s beyond despicable. It’s a dereliction of duty.”

Mr Biden was visiting Michigan for the first time since March, as he steps up his in-person events ahead of November’s election. Mr Trump narrowly won the rust-belt state in 2016, but polls show that Mr Biden is ahead.

In a bid to appeal to the working-class voters in a state that was once the heart of the US car industry, Mr Biden pledged to bring back American jobs to states such as Michigan.

He highlighted the work he and president Barack Obama did for the US car industry in the wake of the 2008 financial crash. “When Detroit declared bankruptcy, I was right here working with the city leaders to get the lights turned back on,” he said.

However, in a possible warning sign to Ireland – the location for some of America’s largest pharmaceutical companies – Mr Biden singled out the pharmaceutical sector as he criticised American companies for offshoring manufacturing and jobs only to sell those goods back to American consumers.

He announced a 10 per cent advanceable tax credit for companies that invest in American workers.

Noting that the US trade deficit hit an all-time high under Mr Trump, he said the current president’s “reckless and chaotic” trade policy had thrown America’s manufacturing industry into recession.