Donald Trump has once again chastised a journalist for wearing a face mask while asking the US president a question at a press conference. Video: C-Span/The White House 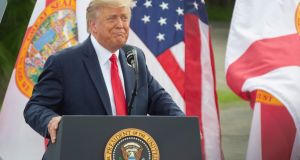 US president Donald Trump speaks about the environmental accomplishments for the people of Florida in Jupiter, Florida. Photograph: Cristobal Herrera-Ulashkevich/EPA

US president Donald Trump has said he would use some of his personal money to finance his presidential run, amid reports that his campaign is facing a cash crunch ahead of November’s election.

Asked if he was considering using his own money to finance his campaign on Tuesday, he replied: “If I have to, I would,” though he added: “we’re doing very well”.

Mr Trump contributed about $50 million (€42 million) of his own money to his 2016 primary campaign.

“If we needed any more, I’d put it up personally, like I did in the primaries last time,” he said. “In the 2016 primaries, I put up a lot of money. If I have to, I’ll do it here. But we don’t have to because we have double and maybe even triple what we had a number of years ago.”

His comments come after the New York Times reported that the Trump campaign has squandered the advantage his team had over Joe Biden in terms of fundraising.

Mr Biden announced a fundraising haul of more than $364 million (€308 million) in August – by far his highest monthly level to date.

No figure has yet been released by the Trump administration for last month. According to the New York Times, the Trump campaign has already spent more than $800 million (€679 million) of the $1.1 billion (€930 million) his campaign and the Republican Party raised between the beginning of 2019 and July this year.

World View - The Foreign Affairs Podcast · US election: the race tightens as Trump's "law and order" message makes an impact

The president was speaking in Florida on Tuesday at an event the White House said would highlight his administration’s “conservation and environmental protection efforts” in the southern state.

Florida – which promises to be a key battleground state in November’s election – has witnessed several environmental challenges in recent years, including flooding, a harmful algae bloom known as “red tide,” and hurricane damage.

In a surprise move, Mr Trump announced an extension of a ban on offshore drilling. But he also outlined what he said were the positive environmental policies undertaken by his administration, claiming that the US has seen a significant drop in air pollution since 2017, and a strengthening of standards to prevent lead and copper exposure in drinking water.

He said that the Democratic Party’s energy policy is “an excuse for advancing a socialist platform that will impose trillions and trillions of new taxes and send our jobs overseas”.

“They talk a big game and do nothing,” he said, of Democrats’ policies on the environment. “It’s all words and no actions.”

To applause, he also hit out at his election rival personally, saying “Joe’s shot”.

Mr Trump claimed a Biden presidency will cause energy prices to “rocket”.

Democrats will “take away our energy independence, and they’ll do it quickly”, he said.

He also referenced Americans’ right to bear arms, set out in the second amendment.

Mr Trump, who was accompanied by Florida’s governor Ron DeSantis at the event, also described Florida as his home state. The president’s Mar-a-Lago estate is situated in Palm Beach, and he officially moved his residency from New York to Florida last year.