Police in Utah shoot boy with autism after mother calls them 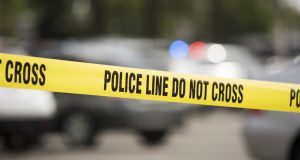 The officer fired at the boy while responding to a call about a “violent psych issue,” Sgt Keith Horrocks of the Salt Lake City Police Department told reporters on Saturday morning. Photograph: Matt Gush/iStock

A Salt Lake City police officer shot a 13-year-old boy with autism on Friday night after his mother called police to get help.

The incident has prompted an investigation and raised concerns about officers’ use of force in Utah’s most populous city which has been reckoning with protests and police accountability.

The officer fired at the boy while responding to a call about a “violent psych issue,” Sgt Keith Horrocks of the Salt Lake City Police Department told reporters on Saturday morning.

“In this case it was a juvenile that was having a mental episode, a psychological episode, and had made threats to some folks with a weapon,” Sgt Horrocks said, adding that the officer had fired his gun “during a short foot pursuit”.

The boy’s mother, Golda Barton, identified her son to local news reporters as Linden Cameron. She said that he did not have a weapon and that she had called police to get help and possibly take him to a hospital.

“I said, ‘Look, he’s unarmed; he doesn’t have anything,’” she told KUTV in Salt Lake City. “He just gets mad, and he starts yelling and screaming. He’s a kid. He’s trying to get attention. He doesn’t know how to regulate.”

She said that as her son was running away, she heard a series of bangs and did not immediately know whether Linden had been killed. “They’re supposed to come out and be able to de-escalate a situation using the most minimal force possible,” said Ms Barton, who did not immediately respond to a request for an interview on Tuesday.

Sgt Horrocks said that the boy was in “serious condition” when he was taken to a hospital on Friday. He said that there was “no indication” that Linden had a weapon but added that an investigation was still under way. The shooting is being investigated by officers in Utah who are not members of the Salt Lake City Police Department. Police in Salt Lake City are expected to release body camera footage of the episode by September 21st.

“I know that these things are very difficult for the community as a whole, and there is a process in terms of looking at what happened and investigating it,” said Detective Greg Wilking, a spokesman for the police department. He declined to name the officer who fired a weapon.

“Good, bad or in between, that process will be carried out, and we will make the body-worn camera available and hold our officers accountable if that’s what needs to happen,” he said.

The episode raised concerns about how police handle interactions with people with autism or who are dealing with mental illness. According to a 2017 study from the Autism Institute at Drexel University, an estimated one in five teenagers with autism are stopped and questioned by police by the time they turn 21. And according to research by the Children’s Hospital of Philadelphia, people with disabilities, including those on the autism spectrum, are disproportionately injured in interactions with the police and are five times more likely to be incarcerated than people in the general population.

“There are plenty of systemic biases against autistic and mentally ill people” in Utah, said Whitney Lee Geertsen, founding director of Neurodiverse Utah, a group that promotes autism acceptance and self-advocacy. She called for more police training on neurodiversity and said that the officers involved in the shooting on Friday should be fired.

Last month, Salt Lake CityMayor Erin Mendenhall signed an executive order that aimed to restrict the use of force by police and promote de-escalation tactics. It was to take effect no later than Saturday, the day after Linden was shot. On Tuesday, Wilking, the police department spokesman, said the adoption of those changes was still under way. He added that all of the department’s officers had been trained in crisis intervention, which focuses on interactions with people who have disabilities or are experiencing mental health emergencies. – New York Times