Monica Witt: from US intelligence officer to alleged Iranian spy 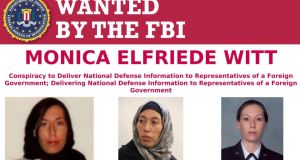 Whatever turned Monica Witt from the US air force and the world of Washington defence contractors and took her to Iran as an alleged defector and spy, it seems to have been a wholehearted transformation.

If the account presented in Wednesday’s justice department indictment is to be believed, the former military intelligence officer was so enthusiastic about turning her back on her homeland and her past that her Iranian recruiters balked, until she threatened to take her secrets to Russia instead and hand them over to WikiLeaks.

Witt converted to Islam in a televised ceremony in 2012 on her first trip to Tehran, at the same time as a more high-profile convert, Sean Stone, the son of US film director Oliver Stone.

Witt and Stone were attending the same conference in Tehran, titled Hollywoodism, addressing the amorality of US movie culture, which had drawn a collection of western mavericks and conspiracy theorists.

Years later she told a Bangladeshi news network that after attending the conference, “I got a chance to think more about myself and the future.”

“These questions have drawn me to Islam: what is the main purpose of life and why we should live in the best way.”

According to a US Treasury statement on Wednesday, the organisers of the conference were closely tied to the Islamic Revolutionary Guard Corps (IRGC) and such events were intended to provide fertile ground for recruiting spies.

There have been few recruits as willing as Witt, as portrayed by US prosecutors. As well as converting to the Shia faith, the 33-year Texan appeared in videos heartily repudiating her government.

Considering she was once was a counter-intelligence specialist in the US air force office of special investigation with the highest possible security clearance, the FBI seems to have been surprisingly relaxed in its view of the sudden turn in her life.

Three months after her Tehran trip, FBI agents warned her that she might become a target for Iran recruitment, and appear to have accepted her assurances that she would give away nothing from her air force intelligence days if she were to return to Iran.

But weeks later, in June 2012, she was visited in the US by a contact she had made in Tehran, identified in the justice department indictment as Individual A, a dual US-Iranian citizen who “engaged in acts consistent with serving as a spotter and assessor on behalf of the Iranian intelligence services”.

Individual A hired Witt, then living in the Virginian suburbs of Washington, as an assistant in the making of an “anti-American propaganda film”, and by the following February the American was back in Tehran offering to defect.

Monica Elfreide Witt was born in El Paso, Texas. Her family moved to Florida when she was quite young. At the age of 18 she joined the air force and became an airborne “cryptologic language analyst” serving with a unit of electronic surveillance planes based in Nebraska and translating intercepted intelligence communications. She learned Farsi at the Defence Language Institute in California.

According to her resume she moved to the special investigations office in 2003 and took part in counter-intelligence, criminal and fraud investigation, at Joint Base Andrews in Washington, the airfield that Air Force One flies out from.

Eventually Witt was drawn into the all-consuming “war on terror”, posted to Thumrait air base in Oman and Irbil in Iraq, according to a posting on an Iraq veterans’ website. The experience seems to have been the key to her disillusion.

“I served in the air force for 10 years and participated in both the Afghanistan and Iraq wars,” she wrote in her short undated biography on the Iraq Veterans Against the War site.

“After viewing so much corruption and the damage we were doing both to Iraq/Afghanistan and to the perception of the US, I decided I needed to do as much as I could to help rectify the situation.”

However, after leaving the air force she stayed in the defence industry. She worked for five months as an intelligence analyst for the contractor Booz Allen Hamilton and then more than two years at another Virginia-based contractor, Chenega Federal Systems, where she said on her resume that she had “supervised, controlled, and coordinated the execution of highly sensitive counterintelligence operations against foreign intelligence services worldwide”.

In 2010 she left work to go back to study, earning a master’s degree in Middle East studies at George Washington University in 2012, and worked as an intern for the Iraq Fulbright Programme, helping Iraqi students find scholarships at US universities.

She told her Bangladeshi interviewer that it was during her time at university she began to question Christianity and western materialism, and became active in the Occupy Wall Street protest movement.

While at university she wrote two essays for the International Affairs Review. One was about the relationship between Tajikistan and Iran, and why the Tajiks were unlikely to be persuaded to participate in western sanctions on Tehran. The second was a co-authored article about the difficulties of subsidy reform.

Neither article gave any sign of the fervour she would display a few months later when, according to the indictment, she was offering to defect and hand over personal details of her former intelligence colleagues.

In a series of emails to Individual A in the summer of 2013, she appeared to be traveling between Afghanistan and Tajikistan asking to be taken in with an increasing air of desperation.

“I told them I am down to little choices and will be traveling to other areas to request assistance,” Witt wrote. After intervention from Tehran, the embassy in the Tajikistan capital, Dushanbe, gave her money to fly to Dubai at the end of July to await an Iranian visa there, Witt said according to the account in the indictment.

It took another month of sending documents, her work history and her “conversion narrative” to Tehran before she was finally given the green light by her Iranian handlers. Finally boarding the flight to Tehran, Witt seems to have been jubilant.

“I’m signing off and heading out! Coming home,” she wrote in her last email before disappearing into Iran, closing with a smiley emoji.

1 Trump threatens to ‘close down’ social media companies after Twitter fact-check
2 Binoculars at the ready: Elon Musk rocket to be seen in Irish skies tonight
3 Sil Fox tells of ‘months of hell’ as he is cleared of sex assault on woman in bar
4 Dr Tony Holohan tells ministers no immediate change to 2m rule
5 Coronavirus: Denmark is reopening society quickly. How is it faring?
Real news has value SUBSCRIBE