Venezuela border: ‘What I earn a month is not enough to buy a bottle of gas’ 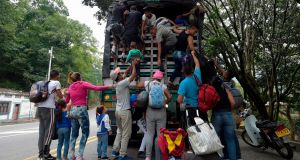 Venezuelan migrants climb on a truck on the road from Cúcuta to Pamplona in Colombia as humanitarian aid is blocked from entering the country. Photograph: Raul Arboleda/AFP

In dismissing the need for the international aid operation being organised by his political opponents, President Nicolás Maduro defiantly said Venezuelans are not anyone’s beggars.

But the situation in Cúcuta tells another story. This border city is the main entry point for Venezuelan refugees arriving in Colombia fleeing the deepening humanitarian crisis back home and many consumed by desperation have been reduced to begging in its streets.

Like others who have made it here and cannot afford to get anywhere else, Aida Farfan ekes out her days approaching cars stopped at red lights, her two-year-old daughter in one arm, the other asking for the small change she hopes will be enough to buy them an evening meal.

Four months ago, Aida and her husband left their home on the outskirts of the Venezuelan capital Caracas in search of one thing only – food. “He had a good job working for a delivery company,” she explains. “He earned a minimum wage but that used to be enough. But now with hyperinflation it buys you nothing, if there was something to buy. But there isn’t. Even the state-run supermarkets are empty. I had to think of my child so we left.”

Like most of the estimated one million who have fled into Colombia, Aida crossed over the Simón Bolívar International Bridge, named after the South American liberator who was the supposed inspiration for the populist Bolivarian revolution of Maduro’s predecessor, Hugo Chávez.

Closed to all but foot traffic since 2015, it is the busiest of the two frontier bridges open, an estimated 40,000 people crossing it daily.

Many are refugees not planning to return home. The luckier ones have enough savings or goods to sell to quickly move on from Cúcuta. Travel agencies by the bridge selling bus tickets to Bogotá, Quito and as far away as Lima have large crowds outside them.

Others are hawking goods they hope to sell for money to buy the food and medicines they can no longer get back across the border, turning the hardscrabble neighbourhood of Parada that borders it into a ramshackle open-air market where everything is negotiable.

Erika Martes and her cousin, Sonia, head back across the bridge after buying food and basic supplies (Parada does a roaring trade in toilet paper). “Some of our family got out to Ecuador and they are able to send us the money to buy food here,” says Erika. She still has a job back in Venezuela, but with inflation heading for 10 million per cent this year “your salary isn’t worth anything. What I earn in a month is not enough even to buy one bottle of gas.”

But for the poorest of those who have crossed over, the neighbourhood has become a temporary home. They sleep in its litter-strewn squares at night, occasionally harassed by local police and vulnerable to the criminal paramilitaries that control the region, which has long been home to a thriving contraband trade.

Among those wandering the dusty streets desperate for help is Maribel Mantilla, medical prescription in hand. She travelled more than 1,250km from Venezuela’s Caribbean island of Margarita to Cúcuta because, lacking a passport, she knew she could at least cross into Colombia using only her identity card.

The grandmother came with her family in part to find medicine to treat her stomach tumour. But she cannot even afford the €5 to fulfil the prescription she was given by the medics who attended her. Her daughter and granddaughters who travelled with her cut off their long hair and, for €15, sold it to the wigmakers who hawk for business among those coming over the bridge. “But that went on food. Now we are desperate,” she says, tears filling her eyes.

The situation has become so critical, say relief workers at the bridge, that they are seeing more and more cases of severe malnourishment among those arriving.

“Our medical staff see kids here who should weigh 12kg but instead are just four,” says David Cañas, the priest in charge of a soup kitchen run by the Catholic diocese of Cúcuta. The kitchen opened in the middle of 2017 serving 700 lunches a day. Now when supplies stretch, it feeds 5,000, with another 2,000 getting a light breakfast of coffee and bread.

Even then it has to turn people away. “Because of the demand we now have to focus on women and children and the elderly. We receive people here who travel up to four hours from Venezuela just to get a plate of soup here before they head back,” says Fr David.

Among those grateful for the soup kitchen is Endrina Zentenas. She and her three young children were unable to eat on Sunday and Monday’s breakfast at the kitchen broke an enforced fast. “It is very difficult for us all. More and more Venezuelans keep arriving. We cannot live any more in our own country so people will keep coming here. We need help!”

Humanitarian aid is arriving in Cúcuta, organised by Venezuelan opposition leader Juan Guaidó, who declared himself interim president last month in the latest bid to eject Maduro from power. But his goal is to transport it this week over another bridge in Cúcuta into Venezuela itself. On Monday, the opposition said more than 100,000 people had already signed up as volunteers to receive and distribute the aid.

But the Venezuelan military has blockaded the Tienditas Bridge over which the aid is supposed to pass and many of the refugees in Cúcuta have no doubt Maduro will be true to his word and keep it out. While they acknowledge the situation back in Venezuela is increasingly desperate, they also ask if the aid, or at least some of it, could not be distributed among Venezuelans in Cúcuta if it cannot cross the border.

“The thing is we all know that if the aid crosses into Venezuela it will be robbed by the . . ,” says Herman Rojas, who instead of finishing his sentence taps his shoulders to refer to the criminal mafias headed up by high-ranking officers in the Venezuelan security forces.