Timing is everything when you are in the shadow of Brexit

Europe Letter: Bid to ban imports from illegal Israeli settlements in the West Bank has bumped up against diplomatic imperatives 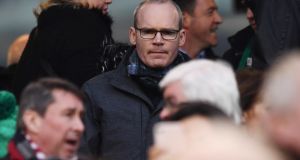 Simon Coveney: he has argued against unilateral action by Ireland as both ineffective in bringing about change and likely to put Ireland out of step with its EU partners

There is not, it would seem, an issue that is not touched in some way by Brexit. Even the ongoing attempt by TDs, against Government wishes, to ban imports from illegal Israeli settlements in the West Bank has fallen foul – in part at least – of Ireland’s Brexit diplomatic imperatives.

Tánaiste Simon Coveney insisted in the Dáil that the Control of Economic Activity (Occupied Territories) Bill 2018 would contravene the EU’s exclusive competence on trade rules, in place to protect the single market, “the defence of which is something which the EU takes very seriously, as we have seen in the context of Brexit. The integrity of the single market is in Ireland’s overall interest.”

Now is not the time, he seemed to say, for Ireland to suggest it might be sympathetic to an à la carte approach to single market rules, or even to testing in the courts the “public policy” exception provided for in article 6 of the Treaty on the Functioning of the EU (“The provisions of articles 34 and 35 shall not preclude prohibitions or restrictions on imports, exports or goods in transit justified on grounds of public morality, public policy or public security...”)

That exception, officials have advised the Government, has been narrowly construed by the European Court of Justice and, as a memo from an Irish official leaked to my colleague Simon Carswell last September warns, following unofficial contact with the European Commission, there is a high likelihood that the commission would sue Ireland in defence of its trade prerogative should the Bill be enacted.

A commission spokesman would not confirm the story, and it does not comment on draft legislation.

A narrow construction of “public policy” also suits Ireland in remaining in step with the 27 who are resisting UK attempts to find ways around the “hard border” issue in Ireland.

But many lawyers do not share such a narrow interpretation of article 6, notably Prof Takis Tridimas, an expert in EU law at King’s College London who finds the Bill entirely compatible with EU law. Many believe that, as Brendan Howlin suggested in the Dáil, the State should be ready to argue the issue out in the courts.

One group of legal experts has argued, moreover, that the EU and its member states individually have a legal obligation to go further. In trading at all in settlement-generated products they are in breach of “fundamental legal obligations resulting from the duty of non-recognition and non-assistance” to the illegal settlements.

They note the very quick imposition of a ban on imports from Crimea following its illegal annexation by Russia.

Coveney has made much play of the likelihood of EU fines to put procedural obstacles in the way of the Bill – if it has financial implications for the State, the Bill requires a “money message” from the Government to pass. It is a procedure that has been rarely called on until recently, but the Government’s minority status has seen it rely on the measure to maintain some control of the Dáil agenda.

The use of potential fines as a justification for a money message requirement is seen by many TDs, however, as a somewhat dubious legal stretch and abuse of the process (although an official in Brussels suggests there might be an argument the Bill has some small foregone excise duty implications  – the State shares in some of the excise duties levied by the EU).

Coveney has also argued against unilateral action by Ireland as both ineffective in bringing about change and likely to put Ireland out of step with EU partners – Ireland has been a strong advocate of a common EU foreign policy and has been keen, in particular, to curb the solo runs of some of the bigger EU states on the world stage.

And it is also likely that were he to accept the spirit and intention of the Dáil, albeit against his own better judgment, and was prepared to urge fellow member states towards a common import ban on settlement products, his initiative would receive scant support, and almost certainly be vetoed by Israeli-friendly states like Hungary.

In its strong support for Palestinian rights within the EU Ireland is an outlier – its ability to push new initiatives on the union to adopt a stronger stand is limited and the building of a new consensus is slow work.