Celebrity supersedes criminality. How can you see clearly when you’re looking into the sun? 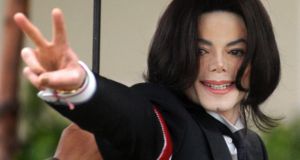 Michael Jackson arriving for the first day of his trial, on charges of molesting a 13-year-old boy, at the Santa Barbara county superior court in Santa Maria, California, on February 28th, 2005. He was found not guilty on all counts. Photograph: Michael A Mariant/AP

When Dan Reed ordered up a score for his documentary, he asked the composer to evoke the image of a shimmering sprite leading two boys deeper and deeper into an enchanted forest. The boys don’t notice that the trees grow menacing. And suddenly, the sprite turns into a monster.

As Leaving Neverland shows, Michael Jackson spent his life shape-shifting from best pal, father figure and beneficent idol into cruel, manipulative rapist. It was apparent for decades that Jackson’s cotton-candy lair was sulfurous. But as with other monsters – Harvey Weinstein, Bill Cosby, R Kelly, Woody Allen, Jeffrey Epstein and Bryan Singer – many turned a blind eye.

Celebrity supersedes criminality. How can you see clearly when you’re looking into the sun? How can an icon be a con? It was easier to ignore a landscape designed as a spider web for child sexual abuse than to give up the soundtrack of our lives, the catchy songs that coursed through memories of weddings, bar mitzvahs and other good times.

“With Michael Jackson, you can see how grotesquely his fame, and our worship of fame, distorts and excuses and enables evil – to the point mothers fail to protect their children and literally throw them in harm’s way,” says Maureen Orth, who did groundbreaking stories in the ’90s for Vanity Fair about both Jackson and Allen.

Indeed, the most harrowing part of the new documentary about the shredded lives of two of Jackson’s victims is the complicity of their mothers. Jackson spent as much time grooming the mothers as the sons, to the point where the women saw nothing wrong in letting their children share a bed with a grown man. (The documentary, which left the audience stunned at Sundance last month, premieres on HBO next month.)

Reed is a Brit who made several documentaries about terrorism. He says he became practised at leading victims gently back to their traumas, so they could use their minds as cameras to bring key moments to life, letting their faces and voices tell the stories.

And that is how the tragedies of James Safechuck and Wade Robson unfold, through the pain in their eyes and the confusion in their voices and the moments where they tear up or swallow hard. Safechuck, who works as a computer programmer, was raised in Simi Valley. He met Jackson when he was a nine-year-old child actor in 1987, starring with the singer in a Pepsi commercial. Jackson promised to make the boy the next Spielberg.

Robson, a dance teacher who did choreography for Britney Spears and ‘N Sync, grew up on the other side of the world in Brisbane, Australia. He spent all his time dressing and dancing like Jackson. He won a dance contest in 1987 and got to meet Jackson, who was on tour in Australia, and dance onstage. Then, he was ensnared in the warped fantasy, a seven-year-old being initiated into sex at Neverland by the 31-year-old Jackson.

The mothers, Stephanie Safechuck and Joy Robson, knew that Jackson was ensorcelling their sons, even as he lured the mothers out of the frame with luxurious enticements. But they were stage mothers and fans, so they chose to believe Michael was a kind, lonely little boy at heart, not a heartless paedophile, and they did not dig deeper when their sons said nothing bad was going on.

“He flies you first class, you have a limo waiting for you at the airport, amazing, you know, it’s a life of the rich and famous,” Stephanie Safechuck gushes in the film, adding: “I got to meet Sean Connery. That was big for me. It was like, ‘Oh my God, Sean Connery!’”

She also loved Neverland: “He had a beautiful wine cellar, really good wines, Champagne, that was just something I enjoyed – it was a fairy tale every night.” After all, as she says, he was a genius and they were “just nobodies”. Jackson bought them a house after Safechuck testified on the singer’s behalf in a trial involving another boy.

It somehow made sense to Safechuck’s mother when she was told that she couldn’t be near the hotel rooms her son and Michael shared in Europe because the nicer suites she would prefer were farther away. As Wade Robson puts it, “What you’d think would be standard kind of instincts and judgment seemed to go out the window.”

His mother left Australia and his father and moved to LA with Wade and her daughter to be closer to Michael; the father later took his own life. After Wade finally told a therapist and his wife and family what had happened, he was alienated from his mother for a time. Like Safechuck, Wade Robson – who lied in court twice to protect the man he loved – had symptoms of trauma that intensified with the birth of his son. Safechuck’s hands shake as he shows a diamond ring that Jackson gave him for a private mock wedding. Robosn had a nervous breakdown and stopped dancing for a time.

“I had one job” and messed it up, Stephanie Safechuck says. “My son had to suffer for me to have this life.” Even with this shocking documentary, the Michael Jackson estate is still demonising the victims and planning to bring a musical about Jackson’s life to Broadway in 2020.

Reed says he is “agnostic” about it: “Am I going to campaign to have Michael’s name removed from classrooms and his statues removed from shopping malls? No. Is this the right time to celebrate Michael as a legitimate good person you might want to emulate? Possibly not.”

And that is what’s known as British understatement. – New York Times