Taking over the role after the firing of James Comey, Former acting FBI director Andrew McCabe told 60 Minutes in an interview broadcast on the 18th February that Trump believed Putin over US advice. Video: CBS/60 Minutes 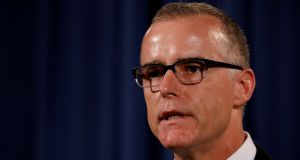 Former FBI acting director Andrew McCabe: “The president may have been engaged in obstruction of justice in the firing of Jim Comey,” he said. Photograph: Aaron P Bernstein/Reuters

A former FBI acting director has alleged that Donald Trump dismissed advice from his own security agencies on the threat posed by North Korea’s missiles, saying “I don’t care. I believe Putin. ”

Andrew McCabe made the claims in an interview with 60 Minutes, in which he discussed his tenure at the FBI after James Comey was fired by the president in 2017.

Mr McCabe said Mr Trump made the comments in a meeting about the weapons capability of North Korea. Mr McCabe was not in the meeting with Mr Trump and said his FBI colleague told him about it later.

“The president launched into several unrelated diatribes. One of those was commenting on the recent missile launches by the government of North Korea. And, essentially, the president said he did not believe that the North Koreans had the capability to hit us here with ballistic missiles in the United States. And he did not believe that because President [Vladimir] Putin had told him they did not. President Putin had told him that the North Koreans don’t actually have those missiles,” said Mr McCabe.

Intelligence officials in the briefing responded that that was not consistent with any of the intelligence our government possesses,” said Mr McCabe in the interview. “To which the president replied, ‘I don’t care. I believe Putin.’”

Mr McCabe said he was shocked when he found about the president’s alleged comments. “It’s just an astounding thing to say,” said Mr McCabe, who added he was surprised at the dismissal of the work of his intelligence community.

“To be confronted with an absolute disbelief in those efforts and an unwillingness to learn the true state of affairs that he has to deal with every day was just shocking,” said Mr McCabe.

Mr McCabe also alleged a “crime may have been committed” when Mr Trump fired the head of the FBI and tried to publicly undermine an investigation into his campaign’s ties to Russia.

Disgraced FBI Acting Director Andrew McCabe pretends to be a “poor little Angel” when in fact he was a big part of the Crooked Hillary Scandal & the Russia Hoax - a puppet for Leakin’ James Comey. I.G. report on McCabe was devastating. Part of “insurance policy” in case I won....

Mr Trump responded furiously on Twitter after parts of the episode were trailed late last week.

“Disgraced FBI Acting Director Andrew McCabe pretends to be a “poor little Angel” when in fact he was a big part of the Crooked Hillary Scandal & the Russia Hoax - a puppet for Leakin’ James Comey. I.G. report on McCabe was devastating,” he wrote on Twitter. “McCabe is a disgrace to the FBI and a disgrace to our Country. MAKE AMERICA GREAT AGAIN!”

Mr Trump retweeted the tweets on Sunday night after the 60 Minutes episode was aired.

Mr McCabe also told 60 Minutes the FBI had good reason to open a counter-intelligence investigation into whether Mr Trump was in league with Russia, and therefore a possible national security threat, following Mr Comey’s dismissal in May 2017.

“And the idea is, if the president committed obstruction of justice, fired the director of the of the FBI to negatively impact or to shut down our investigation of Russia’s malign activity and possibly in support of his campaign, as a counterintelligence investigator you have to ask yourself, ‘Why would a president of the United States do that?’” McCabe said.

He added: “So all those same sorts of facts cause us to wonder is there an inappropriate relationship, a connection between this president and our most fearsome enemy, the government of Russia?”

Asked whether deputy attorney general Rod Rosenstein was onboard with the obstruction and counterintelligence investigations, Mr McCabe replied: “Absolutely.”

A justice department spokeswoman declined to comment on Sunday night.

Mr McCabe also said that when Mr Trump told Mr Rosenstein to put in writing his concerns about Mr Comey – a document the White House initially held up as justification for his firing – the president explicitly asked him to refer to Russia.

Mr Rosenstein did not want to, Mr McCabe said, and the memo that was made public upon Mr Comey’s dismissal did not mention Russia and focused instead on Mr Comey’s handling of the Hillary Clinton email server investigation.

Those actions, including a separate request by Mr Trump that the FBI end an investigation into his first national adviser, Michael Flynn, made the FBI concerned the president was illegally trying to obstruct the Russia investigation.

“Put together, these circumstances were articulable facts that indicated that a crime may have been committed,” Mr McCabe said. “The president may have been engaged in obstruction of justice in the firing of Jim Comey. ”

Mr McCabe was fired in March 2018 by Jeff Sessions after Mr McCabe released information to the media without authorisation, saying he had “lacked candour” when discussing it. His case was referred to the US attorney’s office for possible prosecution, but no charges have been brought. Mr McCabe has denied having intentionally lied and said Sunday that he believes his firing was politically motivated.

“I believe I was fired because I opened a case against the president of the United States,” he said.

Mr McCabe’s appearance on 60 Minutes was to promote his new book, The Threat: How the FBI Protects America in the Age of Terror and Trump. – Guardian