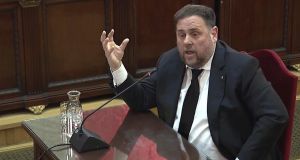 Catalonia’s former vice-president, Oriol Junqueras, gave an impassioned defence of his region’s independence cause and attacked the legal case against him as he appeared before Spain’s supreme court on charges of rebellion and sedition on Thursday.

Mr Junqueras and 11 fellow Catalan independence leaders are on trial for their role in the events of autumn 2017, when the region defied court orders by staging a referendum on secession, before declaring itself a republic.

“From my point of view, nothing we did is a crime, neither voting in a referendum, nor working towards the independence of Catalonia,” said Mr Junqueras (49), who could face a 25-year jail sentence if found guilty of the rebellion charge brought against him by public prosecutors. He is also accused of misusing public funds.

Mr Junqueras, who is leader of the Catalan Republican Left (ERC), was the first defendant to face questioning in the trial, which began on Tuesday. The independence movement has portrayed the legal process as an attempt by the Spanish state to punish Catalan nationalist ideology, rather than any particular crime – a claim the authorities deny.

Describing it as a “political trial”, Mr Junqueras refused to answer questions from the three plaintiffs in the case: the public prosecutor, the state lawyer and far-right party Vox, which has presented a popular prosecution. Instead, he responded to questions from his own lawyer.

He placed particular emphasis on the peaceful nature of the independence movement, given that the rebellion charge implies a use of violence against the Spanish state.

“Nobody can ever cast in doubt the fact we have always rejected violence, any form of violence,” Mr Junqueras said.

Ahead of Thursday’s session, the presiding magistrate, Manuel Marchena, told the court that defendants could answer questions in the Catalan language if they wished. However, Mr Junqueras, who has been in preventive custody since November 2017, chose to use Spanish.

“For me it’s a pleasure to speak in Spanish because it gives me the chance to address the Spanish people after a year and a half of enforced silence,” he said.

Also on Thursday, the former Catalan interior minister, Joaquim Forn, who faces the same charges, was questioned. He said that the Catalan police force told him ahead of the referendum of October 1st, 2017, that widespread violence was not expected, although Spanish police did end up charging at voters in several ballot stations.

He also said that former Catalan president Carles Puigdemont originally wanted to call a regional election after the referendum. However, eventually Mr Puigdemont deferred the decision to the Catalan parliament, which approved the independence declaration.

Spanish MEPs wrote to the president of the European Parliament, Antonio Tajani, on Thursday, asking him to block an appearance by Mr Puigdemont in the chamber next week. The former Catalan leader, who escaped the Spanish justice system by fleeing to Belgium, is due to discuss Spain’s supreme court trial on Monday alongside the current Catalan president, Quim Torra.

The letter, signed by representatives of Spain’s Socialists, the Popular Party (PP) and Ciudadanos, described Mr Puigdemont as “someone who has boasted of his repeated disobedience of the orders and warnings issued by the constitutional court”.