Maureen Dowd: For the White House parasite, all restraint has gone

An unfettered Trump, playing out his own movie script, setting a torch to Washington 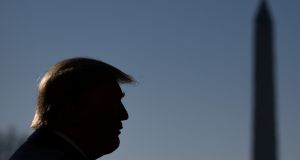 US president Donald Trump on the White House lawn on Sunday prior to departing on a two-day trip to India. This was another bad, crazy week trapped in Trump’s psychopathology. Photograph: Saul Loeb/AFP via Getty Images

It’s funny that Donald Trump doesn’t like a movie about con artists who invade an elegant house and wreak chaos. He should empathise with parasites. No doubt the president is a movie buff. He has been known to call advisers in the wee hours to plan movie nights at the White House for films he wants to see, such as Joker.

And, in an early sign of his affinity for tyrants, he told Playboy in 1990 that his role model was Louis B Mayer running MGM in the 1930s.

Trump interrupted his usual rally rant on Thursday night to bash the Oscars, saying: “And the winner is a movie from South Korea. What the hell was that all about? We got enough problems with South Korea with trade. On top of it, they give them the best movie of the year?”

He added: “Can we get Gone With the Wind back, please? Sunset Boulevard. So many great movies. The winner is from South Korea. I thought it was best foreign film, right? Best foreign movie. No. Did this ever happen before?

Our president is nostalgic for a movie romanticising slavery and a movie about an ageing diva swanning maniacally around a mansion, living in a vanished past. (I am big. It’s the party that got small.)

Trump’s xenophobic movie criticism, combined with his mocking pronunciation of the name “Buttigieg”, harked back to the days when George HW Bush ran in 1988 wrapped in the flag, saying he was on “the American side” while his celebrity endorser Loretta Lynn complained that she couldn’t even pronounce the name Dukakis. Too foreign-sounding.

It also echoed a segment on Laura Ingraham’s show on Fox News, in which it was suggested that Lt Col Alexander Vindman, an American war hero who immigrated from Ukraine, might be guilty of espionage. And in his Vegas rally on Friday, Trump was again calling his predecessor “Barack Hussein Obama”.

This was another bad, crazy week trapped in Trump’s psychopathology. No sooner was the president acquitted than he put scare quotes around the words justice and Justice Department and sought to rewrite the narrative of the Mueller report, whose author warned that Russia was going to try to meddle in the US election again.

Philip Rucker wrote in the Washington Post: “As his re-election campaign intensifies, Trump is using the powers of his office to manipulate the facts and settle the score. Advisers say the president is determined to protect his associates ensnared in the expansive Russia investigation, punish the prosecutors and investigators he believes betrayed him, and convince the public that the probe was exactly as he sees it: an illegal witch hunt.”

Trump, who moved from a Fifth Avenue penthouse to the White House, is sinking deeper into his poor-little-me complex, convinced that he is being persecuted. His darker sense of grievance converges with a neon grandiosity.

Trump is totally uncontrolled now. Most presidents worry about the seaminess of pardons and wait until the end. Trump is going full throttle on pardoning his pals and pals of his pals in an election year.

The Republicans have shown they are too scared to stop him and won’t. The Democrats want to stop him but can’t. (Although, if they win the Senate back, Democrats will probably end up impeaching him again and this time have plenty of witnesses.)

Now, in a frightening new twist, the president is angry at his own intelligence team for trying to protect the national interest. He would rather hide actual intelligence from Congress than have Adam Schiff know something that Trump thinks would make him look bad politically.

As the New York Times reported, the president’s intelligence officials warned House lawmakers in a briefing that Russia was once more intent on trespassing on our election to help Trump, intent on interfering in both the Democratic primaries and the general. (They also told Bernie Sanders that the Russians were trying to help his campaign.)

The president replaced Maguire as acting director with Richard Grenell, the sycophantic ambassador to Germany

News of the House briefing caused another Vesuvian eruption from the mercurial president, who is hypersensitive to any suggestion that he isn’t winning all on his own. The New York Times story said that “the president berated Joseph Maguire, the outgoing acting director of national intelligence, for allowing it to take place,” especially because his nemesis Schiff was present.

A few days ago, the president replaced Maguire as acting director with Richard Grenell, the sycophantic ambassador to Germany whose qualifications for overseeing the nation’s 17 spy agencies include being a former Fox News commentator and Trump superfan who boasts a gold-level card with the Trump Organization.

As the Democrats sputter and spat and fight over federal giveaways and NDAs, the unfettered president is overturning the rule of law and stuffing the agencies with toadies. Nothing is in the national interest or public good. Everything is in the greater service of the Trump cult of personality. In Gone With the Wind, Atlanta burned to the ground. In Trump’s version, Washington is aflame. – New York Times