Vermont senator Bernie Sanders addresses supporters in El Paso, Texas after surging to victory in the Nevada caucuses on Saturday, cementing his position as the frontrunner in the Democratic primary race. Video: Reuters 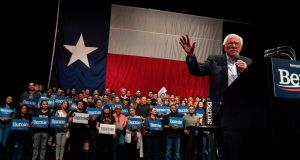 Vermont senator Bernie Sanders surged to victory in the Nevada caucuses on Saturday, cementing his position as the frontrunner in the Democratic primary race.

His decisive performance followed his victory in New Hampshire on February 11th and a virtual tie with Pete Buttigieg in the Iowa caucuses, though the final results in Nevada were still unconfirmed early on Sunday morning.

Speaking at a campaign rally in Texas as the results came in, Mr Sanders praised volunteers for help delivering an agenda “that will work for the working classes.”

“In Nevada we have just put together a multigenerational, multiracial coalition which is not going to only win in Nevada, it’s going to sweep this country,” he said to cheers, pledging to introduce healthcare for all, free university tuition and the legalisation of marijuana.

He also promised to cancel student debt by imposing “a modest tax on Wall Street speculation.”

“Twelve years we bailed out the crooks on Wall Street now it’s their turn to help the working families of this country,” he said.

Mr Sanders has been widening his lead in the Democratic race for the party’s nomination in recent weeks, with young voters in particular warming to his message. Some 66 per cent of voters aged between 17 and 29 in the Nevada caucuses backed Sanders according to entrance polling.

But in a trend that will worry other candidates, there were signs that Mr Sanders is widening his appeal to a larger cohort of voters than in the 2016 primary contest.

Polls shows that 24 per cent of college-educated women voters backed Mr Sanders – more than any other single candidate, including the two female candidates Elizabeth Warren and Amy Klobuchar, who secured 17 and 18 per cent respectively.

In a state where Latinos make up almost 30 per cent of the population, Mr Sanders secured 53 per cent of the Hispanic vote - about three times as much as Joe Biden, his nearest rival.

In a sign that Mr Sanders’ rivals are likely to increase their attacks on his candidacy ahead of next Saturday’s South Carolina primary, former Indiana mayor Pete Buttigieg, who was projected to finish in second or third position, asked Democratic voters to “take a sober look at what’s at stake.”

“Senator Sanders believes in an inflexible, ideological revolution that leaves out most Democrats, not to mention most Americans,” he said.

Mr Biden struck a more upbeat tone as he claimed second-place in a speech to supporters in a union hall in Las Vegas, predicting a strong performance in South Carolina, the next state to vote. But he also pointedly highlighted – in an apparent jibe at Mr Sanders and Democratic hopeful Mike Bloomberg, who was not on the ballot in Nevada – his credentials as a Democrat. “I ain’t a socialist, I ain’t a plutocrat, I’m a Democrat,” he said.

‘Bernie has been Bernie from day one’

The Sanders surge that took place across the state was in evidence in thousands of caucus sites across Nevada. Indian Springs, an old railroad town west of Las Vegas near Death Valley, has seen better days.

The expansion of a local air force base forced the closure of the town’s main hotel and casino in 2014, removing what was left of the town’s commercial heart. Shortly before noon on Saturday, a local Democratic volunteer called the small caucus to order at the local community centre. Of the 11 caucus-goers, five went for Bernie on the first round, two for Pete Buttigieg and two for Joe Biden. Following the elimination of the Tom Steyer and Amy Klobuchar votes, Buttigieg gained two more votes.

Rick, a local resident, explained why he was voting for Sanders. Now retired, he was working as an electrician in Oakland, California in the mid-1990s, but relocated to Las Vegas when his union representative helped set him up with work. He is a committed Bernie supporter. “Bernie has been Bernie from day one,” he says. “He doesn’t go with the tide. If a tide is going one way, you know Bernie is still Bernie no matter what.” Colin agrees.

“The reason he is doing well is the same reason Trump did well,” he contends. “It’s that we’re sick of the same old, same old. People want somebody who might possibly do something a little more frickin different, to be honest. Our country is going to hell in the handbasket.”

Elizabeth, who is originally from suburban New York and moved to Nevada to work as a healthcare professional, was one of the many college-educated women who voted for Sanders on Saturday. She voted for Hillary Clinton in 2016 but decided to give her vote to Sanders this time around. “I’m doing it for millennials. This is their future, and the system has let them down. As a former healthcare professional, I believe something radical needs to be done to take on the pharmaceutical companies.”

Nonetheless, despite Sanders’ commanding performance in Nevada, he faces a tougher challenge in the next primary contest in South Carolina next Saturday – a state where the majority of Democratic voters are African-Americans.

The Nevada caucuses also raised questions about the viability of Elizabeth Warren’s campaign. Despite a very strong performance at the Democratic debate on Wednesday when she confronted Mr Bloomberg, any upswing was likely to have been minimal given the high proportion of people who had already voted in the state’s early voting process.

Speaking in Seattle after the caucuses, Ms Warren thanked the voters of Nevada for “keeping me in the fight,” and predicted she had the “momentum” needed for future states.