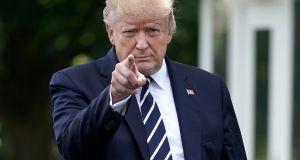 US president Donald Trump: doesn’t worry about inciting violence against those he slimes. Photograph: Chip Somodevilla/Getty

I can’t come down to your memorial on a sultry night for my usual midsummer outing of mindful meditation and astral projection. The time is out of joint, as Hamlet said.

How do you commune with the man who sacrificed his life to bring the races together when nearby dwells the man who is soiling his life – and ours – driving the races apart? I love all the luminous white-marble monuments and the landmarks in my hometown, the permanent Oz within our transient capital. I still shiver when I think that the 9/11 terrorists might have destroyed any one of them.

But my favourite has always been the Lincoln Memorial, because on its north chamber is engraved the brief, inexpressibly beautiful Second Inaugural Address – the most poetic expression of what the American soul should be. Lincoln tried to knit his unravelled country, knowing his side was right, yet accepting those on the other side as God’s children: “With malice toward none; with charity for all.”

“Both read the same Bible and pray to the same God, and each invokes His aid against the other,” Lincoln said. “It may seem strange that any men should dare to ask a just God’s assistance in wringing their bread from the sweat of other men’s faces, but let us judge not, that we be not judged.”

It is a travesty that Donald Trump, 154 years after Lincoln tried to bind the wounds of the nation on race to keep the dream of America viable, is pouring salt into those wounds to keep himself viable.

Lincoln tried to wrestle down a clash of civilisations. Trump is ginning one up to get re-elected. He doesn’t worry about inciting violence against those he slimes. When I asked him about that in 2016, he said that he thought the rabid mood and physical altercations at his rallies added an air of excitement, and that his political journey into the heart of darkness is what got him to No 1, so why wouldn’t he continue on it?

The president who hates flies is like flypaper. No matter how you come at him, buzzing past his outrages and lies like the Republicans or landing hard on them like the Democrats, you get stuck. Both parties end up caught and struggling in the sticky mess.

Nancy Pelosi was trying to keep the Democrats in the centre-left lane, where their best chance of beating Trump lies. But with his vile “go back” rant against four American Democratic congresswomen, the president – at least for now – achieved his stated aim of “marrying” the speaker to the far-left squad. Given some of the hyper-liberal ideas tossed out by the Democrats in the first round of debates, Pelosi will have to work harder than ever to keep her party’s image where it needs to be with the real base, as opposed to the Twitter base.

The Republicans typically prefer a more subtle racism to rev up the base. In the past, they have handed the racist ploys off to hidden allies, then denied knowledge of Willie Hortonesque efforts to rouse hate. It’s ugly and disorienting – even to many Republicans – to see the toads jumping directly from the mouth of a president.

But as the boorish Trump has told reporters, “I don’t really care about offending people.” He doesn’t rely on division only for elections, like his predecessors; he uses it to govern. And while that is a tad embarrassing for Republicans, they know from half a century of experience that it works to stir up racial animus and label foes wild-eyed socialists and commies.

Trump doesn’t rely on division only for elections, like his predecessors; he uses it to govern

Mitch McConnell admitted this on Thursday when he told Fox Business that “the president is on to something” with his fragging, though he denied Trump was a racist. While it is awful to contemplate, this trade-off of our national ideals for strong stock returns and more millions for billionaires could be working.

As the New York Times’s Nate Cohn wrote on Friday, Trump’s Electoral College edge could grow in 2020 because “a strategy rooted in racial polarisation could at once energise parts of the president’s base and rebuild support among wavering white working-class voters”.

After pretending fleetingly that he had been unhappy that some in the crowd at his North Carolina rally chanted “Send her back” about Rep Ilhan Omar, the president returned to his natural habitat of hate. On Friday, he resumed attacking the squad as “terrible” and a “disgrace”, praising himself because he said he could have filled the North Carolina stadium 10 times and calling the rallygoers “incredible patriots”.

As with Charlottesville, he will never disavow his people. He loves even the hardest of his hard-core base because they boost his crowd size, his electoral count and his ego. We’re all stuck on the flypaper. Democrats need to up their game to avoid the traps Trump is constantly setting for them. Abraham Lincoln led us through a tragedy. Donald Trump is one. With malice toward all; with charity for none. – New York Times