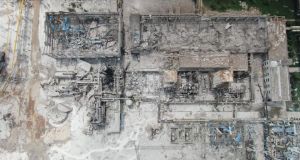 Damaged buildings are seen at the site of an explosion at the Henan Coal Gas Group factory in Yima city, in China’s central Henan province on July 20th. Photograph: AFP/China Out/Getty

An explosion at a gas plant in central China has killed at least 10 people and seriously injured others, authorities said Saturday.

Five people were missing. The explosion on Friday evening, in the city of Yima in Henan province, sent a ball of fire and thick plumes of smoke into the air, according to local state media. The fire charred the factory building, leaving only the frame, the accounts said.

As the fire spread, nearby houses collapsed, and windows were shattered as far as 3km away, residents said. The explosion occurred in the air separation unit of a factory owned by the Henan Coal Gas (Group) Co, according to Xinhua, the state-run news agency.

No explanation was given for the explosion. Several large explosions have occurred at chemical plants in China in recent years. The central government has ordered improvements in safety at factories, power plants and mines, where regulation is often lax and management of explosive materials often haphazard.

In 2015, 173 people were killed, most of them emergency workers, in explosions at a chemical warehouse in the port city of Tianjin. Unsafe storage of volatile materials was a cause of the blasts. – The New York Times News Service