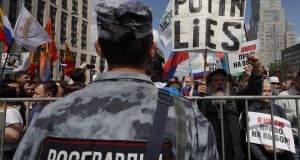 More than 20,000 protesters gathered in Moscow on Saturday to demand free and fair elections in one of the biggest anti-government rallies in the Russian capital in years.

The Moscow Election Commission has refused to register more than 20 opposition-minded candidates for an upcoming city legislature ballot, claiming they failed to collect enough valid voter signatures to qualify for the ballot.

Opposition leaders say their comrades have been rejected for challenging the pro-Kremlin United Russia party’s control of the Moscow City Duma and have been calling people out on the streets to protest.

“We’ll show them this is a dangerous game,” Alexei Navalny, the opposition politician and anti-corruption crusader told the demonstration on Saturday. “We must fight for our candidates.”

However, election planners appear to have underestimated the protest mood in the capital where residents – dismayed by recent local government moves to raise utility prices, introduce parking fees and close many hospitals and schools – are becoming increasingly politicised.

White Counter, an independent organisation that monitors turnout at demonstrations, calculated that 22,500 people joined Saturday’s rally on Moscow’s sprawling Sakharov Prospekt, making it the biggest protest in the city since 2012. Police put the number much lower at 12,000.

Russia’s Libertarian Party had organised the event that brought together a politically diverse crowd of liberals and leftists as well as unaligned people who have come to see a change in the management of the city as the only hope to improve their lives.

Volunteers distributed banners and whistles for protesters to signal alarm that their rights to free and fair elections were being trampled upon. “I’m here because I’m sad and angry that our authorities have decided we don’t exist and that our opinions don’t matter,” said a young IT engineer who had dragged his hungover friend out of bed to join him at the demonstration. “It’s downright insulting,” he said, declining to give even his first name for fear of police reprisals.

“I don’t know where to turn, I haven’t had hot water in my flat for weeks,” said Klara, a pensioner, who had decided to protest for the first time in her life after Yulia Galymina, a municipal councillor in the district where she lives, was turned away from the Moscow City Duma ballot.

Moscow police had given permission for the demonstration and hardly interfered until the end, when some protesters refused to leave Sakharov Prospekt. In all, law enforcers detained six protesters, including one man whose arm was broken during a struggle with police, according to OVD-Info, a rights group that monitors arrests.

Encouraged by the sheer size of the rally, opposition leaders appear to believe that the time has come to mount a serious challenge to the authorities from the streets. In a written ultimatum, they threatened to bring a huge crowd to the door of the mayor’s office in central Moscow next weekend unless their candidates were admitted to the ballot.

In an impassioned speech, Navalny urged all Muscovites to “rise up from the couch” in solidarity. “I understand there will be arrests . . . But we have nothing to lose . . . There is no other way,” he bellowed.

Ilya Yashin, an opposition activist who heads the municipal council in Moscow’s Krasnoselsky district, warned it would take time and persistence to force the election commission to back down. “I’d like to say we could do it with one or two meetings, but it’s not going to be like that,” he said. “We’re in for a long and difficult battle ahead. We must all stand together.”