‘God put him there’: Nicaragua’s defiant leader clings to power 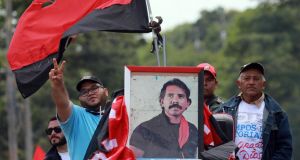 Support for Daniel Ortega is often framed in mystical terms, locating him above the fray of everyday life. Photograph: INTI OCON/AFP/Getty Images

In the years following the Sandinista revolution of 1979, labour day was routinely marked in Nicaragua by mass gatherings that honoured fallen heroes and famous battles, workers and women, in song and in speech.

Wandering the wide avenues and back streets of Managua on May 1st last, I was keen to witness such celebrations. “You’re wasting your time,” said Daniel Díaz, a street seller, “those days are long gone.”

The Plaza de la Revolución, a giant concourse where the masses once gathered, had a forlorn, abandoned air. Nearby, the Monument to the True Heroes of the Revolution stood lonely sentinel, a stone’s throw from Luis Alfonso Velazquez Park, named after a child martyr.

The Revolutionary Hero, a rusting hulk of a statue, wields a pickaxe and an AK-47. “Only the workers and the farmers will go all the way,” proclaims the plaque beneath, as cars speed by.

The rallies and speeches defined a revolution forged by sacrifice, reminding citizens of the price paid for freedom and warning enemies that the revolution remained vigilant in the face of permanent US hostility.

President Daniel Ortega is the surviving link between a glorious past and a promising future; if he remains in office until his term ends in 2021, he will have ruled Nicaragua for 20 years, over two spells.

Support for Ortega is often framed in mystical terms, locating him above the fray of everyday life. “God put him there,” said one supporter at the sprawling Oriental Market, “only God can take him away.”

Elsewhere, Armando Godoy, a stocky, ponytailed middle-aged artist, was busy shifting equipment outside the Cinemateca, a centre for the arts in downtown Managua. “There will always be begrudgers,”’ he says, when asked about the health of the revolution, “we narrowly escaped a coup d’etat, the streets were on fire.”

Godoy escorts me to a nearby plaza where a public dance school is putting youngsters through their paces. “All these opportunities,” he says, gesturing at the children, the costumes, the music, “have been created by this government.”

In April 2018 hundreds of thousands of people took to the streets to demand the ousting of Ortega, who has governed since 2007.

“We are living in a different country now,” admits Cairo Amador, a prominent political analyst, reflecting on recent events. Amador was appointed by Ortega to the Truth, Peace and Reconciliation Commission in May 2018, tasked with investigating the uprising against Ortega and identifying ways to move forward.

Cairo believes the Ortega administration was a victim rather than a perpetrator of violence: “There were 3,000 tranques across Managua,” he says, referring to a labyrinth of barricades that shut down the city for several weeks.

Amador acknowledges that “multitudes” occupied the streets but he maintains they were manipulated by social media. He also accepts that crimes were committed by Ortega’s security forces but says that in the context of a public emergency, firm action was required. “The situation had got completely out of hand,” he says.

The government commission has revised figures of the dead downwards, from 325 to 253 and claims to have uncovered “unknown victims” killed or injured by activists. “I don’t believe that Ortega ordered all those people to be killed,” he says.

These days Ortega dispatches from the family compound in El Carmen, a residence seized from an oligarch which occupies an entire city block. Ortega governs alongside his wife and vice-president Rosario Murillo and their eight children, who occupy key posts in the areas of media and investment.

Ortega greeted a small crowd of supporters inside a conference centre on the eve of Worker’s Day. The president eulogised the Nicaraguan worker, from humble shoe-shiner to emergency nurse. The litany of trades and professions gave way to the topic of damaging sanctions imposed by the US and Canada against named government officials. Ortega blamed the opposition, “those human miseries” lacking even a grain of patriotic dignity.

The Civic Alliance, representing a broad opposition movement, is demanding electoral reforms as Ortega controls every aspect of the process, from voter ID and candidate registration to the fate of ballot boxes and the final vote tally. The alliance is also seeking the release of 90 remaining political prisoners, the restoration of civil liberties and early elections.

The opposition includes prominent former Sandinistas, outraged at the manner in which Ortega has abolished term limits and crushed all opposition. Azahalea Solis, a delegate to the peace talks, says the country needs much more than a change of leader. “We need a new national campaign, to teach the ABC of human rights.” Only then, she believes, will Nicaragua put an end to the era of the Caudillo, or strongman, perpetually clinging to power.

Rafael Solis, a former supreme court judge and sole witness at Ortega’s wedding, jumped ship in January. In his resignation letter, he insisted there was no coup attempt or outside intervention, “but rather an irrational use of force”.

A recent report by Human Rights Watch backed the call for international sanctions against the Ortega administration, “the only language that Ortega and Murillo understand”. Otherwise, the report concluded, “there is zero probability of an improvement in human rights, much less a transition to democracy”.

Daniel Ortega served as a boy scout and altar boy before throwing his lot in with Nicaragua’s Sandinista National Liberation Front (FSLN) while still a teenager. In 1967, aged 21, he shot dead police sergeant Gonzalo Lacayo. “I felt no personal hatred toward him,” Ortega told Playboy magazine in 1987, “it was something which had to be done.”

Nicaragua was governed by the brutal Somoza dynasty from 1936 to 1979, a succession of US-backed tyrants who imprisoned, tortured and murdered opponents with impunity. Ortega was jailed for seven years, suffering frequent bouts of torture. “He was disfigured, he looked like a monster,” recalled fellow prisoner Haroldo Solano.

Ortega was released from jail in a hostage swap in 1974, securing passage to Cuba before moving to Costa Rica. He returned to Nicaragua in July 1979, when Somoza fled and the Sandinistas seized power.

The triumphant rebels launched a programme of radical reform in which land was distributed, universal healthcare established and in 1980, a literacy campaign undertaken, the highlight of a collective dream. The revolution promoted worker co-ops but tolerated private enterprise and abolished the death penalty. Everything seemed possible as the nine ruling comandantes steered the country toward a less rigid version of Cuban socialism.

Ortega, nerdy looking, slight of stature, was picked to be the public face of the government in 1979 and ratified as president at the polls in November 1984.

US president Ronald Reagan imposed a crippling trade embargo along with a debilitating war of aggression, supporting Contra rebels in a conflict which devoured half of Nicaragua’s annual budget. Inflation soared.

The government imposed compulsory military service and as the casualties mounted, support for the revolution declined. In 1990 voters elected a conservative coalition led by Violeta Chamorro.

Ortega accepted defeat but vowed to return to power. He was rejected twice in successive polls (1996 and 2002) but secured re-election in December 2006 after reaching an agreement with the opposition to reduce the margin of votes required for a first-round victory. Ortega also embraced Christianity and secured parliamentary approval for an anti-abortion law that prohibited abortion even where the life of the mother was at risk.

In 1998 Ortega survived a serious challenge when his stepdaughter, Zoilamérica Narvaez publicly accused him of prolonged sexual abuse. In a 50-page affidavit, Narvaez described her harrowing ordeal in graphic detail. Rosario Murillo, her mother, stood by Ortega. Both of them denied the charges.

Sergio Ramirez, Nicaraguan vice-president (1984-1990), found Ortega “lonely, solitary, mistrustful and hard”, qualities which served him well in an era of underground struggle but which have left him isolated during the current crisis.

In a rare break with established protocol, Ortega and Murillo attended an opening round of talks in May 2018 where student leader Madelaine Caracas read out the names of those killed in the violence. Ortega stared ahead, his expression blank. “We are not here to negotiate anything but your resignation,” said another student. Lesther Aleman.

A year on, Caracas and Aleman have fled into exile, along with 60,000 more Nicaraguans, while Ortega remains in power, bloodied but defiant.