Send me back to Ireland – the country I came from

Trump told those of us who don’t like what’s happening in the US to get out. A fine idea 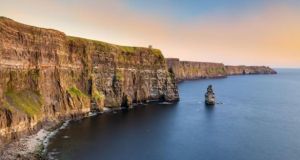 He’s right, this angry old man in melting bronzer shouting in the July heat: Those of us who don’t like what’s going on in this country should get the hell out. “Go back,” as he said, to the “crime-infested places from which they came.” A fine idea.

For me, as with more than 30 million other Americans with my hyphenate, that’s tiny Ireland, the country once so infested with crime, famine, disease and assorted horrors of foreignness that its British overlords said a merciful God was doing a favour by killing off the starving masses.

So back I went to have a look. This, mind you, was just before president Donald Trump’s suggestion to his fellow citizens to get out. And also, generations after someone on my father’s side made the choice to flee for life itself, rather than fall into the cold Irish ground through the bottom of a reusable coffin.

What I found on that island where typhus once took entire families as they shivered on floors of mud, where, by one medical estimate, 50 per cent of the children in Dublin once died before their first birthday, is now a land of universal health care.

Health care for all residents: It’s still a surprise to someone from a nation where the number of uninsured Americans has gone up by 7 million under Trump. I had left a place where nearly 1 in 7 people are left to fend for themselves when sick, to a fully covered country, the norm in most of the industrialised world.

What I found in that place where barefooted, Gaelic-speaking hordes once could not read an English sign are colleges nearly free to its citizens – good colleges, at that. Imagine, a family not having to bankrupt itself to help a child off to a better life.

What I found is a republic where nearly 1 in 8 people were born abroad, nearly as high a percentage as the foreign-born population of the United States. The prime minister, Leo Varadkar, is himself a son of an Indian immigrant. His father was born in Mumbai, while his mother hails from County Waterford, the home also of my mother’s distant family.

That 19th-century hellhole has become a 21st-century heaven. The Irish have become us – what we wanted and aspired to. They are living our national narrative, a country open to those fleeing oppressors and lack of opportunity. Its prime minister would never gloat over a “send her back” chant at a hatefest directed at new members of the republic.

Back home in America, the unimaginable is the new norm: a fully blossoming fascism. We’re stuck in a hideous loop of hate. But it’s also an idiocy loop. Why are we arguing about something any second grader has already settled after looking around the classroom and realising that nearly every other child is a descendant of someone from a foreign land? Read the resolution the House of Representatives passed on Tuesday, citing Ronald Reagan, John F Kennedy and Benjamin Franklin, and quoting Franklin Roosevelt’s call to “remember always, that all of us, and you and I especially, are descended from immigrants and revolutionists.” It’s the kind of immigrants-make-a-nation-stronger boilerplate that would normally pass the House with unanimous consent, but it drew only four Republican votes.

This is how low Trump has taken us. We are a debased nation fighting over the scraps of our former principles. Should someone offer a resolution saluting the “purple mountain majesties” of the United States, every Republican would vote against it if Trump tweeted against a colour that is not orange. Senator Mitch McConnell, whose immigrant wife is indirectly a target of this sludge, would say, as he did about the “send-her-back chants,” that the president is “on to something.”

I’m against the dismissal of others with the preemptive pejorative of “white privilege.” It closes minds and ends conversations. But this is one case where white privilege applies. For Trump’s tweet wasn’t aimed at me. Nor was it directed at his vice president, the cipher and coward Mike Pence, himself an Irish-American.

Trump’s hate blast was directed solely at people of colour. His tweet was the textbook definition of racism. And I should add in the interest of full transparency, I disagree with much of the policy initiatives of the four left-wing congresswomen targeted by Trump. It was wrong and incorrect for them to make Nancy Pelosi’s disagreement with them about race. That episode was another textbook illustration of why the far left has trouble winning a majority.

But let’s leave that discussion for another day. Back in the country from which I came, the Irish appear genuinely perplexed at this American vomiting of principle. Writing in The Irish Times, Oliver Sears, a British-born resident of Ireland and son of a Polish holocaust survivor, wondered how any immigrant could ever vote for Trump.

I heard a similar thing when I went back: How could Irish-Americans vote for this awful man without becoming traitors to their heritage? For this Ireland has become what America used to be. If only America could be more like this Ireland.