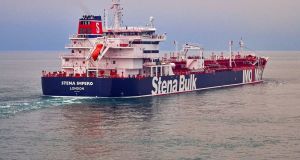 British foreign secretary Jeremy Hunt will unveil the diplomatic and economic measures on Monday in response to the apprehension and detention of the Stena Imperto. Photograph: Stena Bulk/PA Wire

Britain has called Iran’s capture of the Stena Impero in the Gulf on Friday a “hostile act” and rejected Tehran’s explanation that it seized the vessel because it had been involved in an accident.

The “UK government should contain those domestic political forces who want to escalate existing tension between Iran and the UK well beyond the issue of ships. This is quite dangerous and unwise at a sensitive time in the region,” Iran’s envoy to Britain Hamid Baeidinejad said on Twitter.

“Iran however is firm and ready for different scenarios,” he said.

The crew of the tanker seized by Iran’s Revolutionary Guards are all safe, the head of the Ports and Maritime Organisation in Hormozgan Province told state TV on Sunday.

“All 23 crew members aboard the ship are safe and in good health in Bandar Abbas port,” Allahmorad Afifipour said.

The UK government is looking at a “series of options”. Defence Minister Tobias Ellwood denied that the UK had taken its “eye off the ball” after the vessel was commandeered in the Omani waters in the economically significant Strait of Hormuz.

It has been reported that ministers are considering freezing assets of the Iranian regime in response to the diplomatic incident.

Meanwhile, audio footage has since emerged between Iranian authorities and HMS Montrose, a Royal Navy frigate which is patrolling the Persian Gulf to protect shipping, moments before the Stena Impero was seized.

In the radio recording, the Iranian vessel can be heard saying: “If you obey, you will be safe. Alter your course immediately. I want to inspect the ship for security reasons.” HMS Montrose replied: “You must not impair, impede, obstruct or hamper the passage of the Stena Impero. Please confirm that you are not intending to violate international law by attempting to board.”

Mr Hunt said he will unveil the diplomatic and economic measures on Monday in response to the apprehension and detention of the Stena Imperto, according to the Sunday Telegraph. The paper said London may also seek the reimposing of UN and EU sanctions which were lifted against Iran in 2016 in connection to a deal on the country’s nuclear programme.

Asked if sanctions were off the table during Sky’s Sophy Ridge on Sunday, Mr Ellwood said: “Cobra (the Government’s emergency committee) was taking place yesterday so we’re looking at the operational responsibilities from that but yes, we are going to be looking at a series of options.”

He added: “We need sensible negotiations. We’ve got a really important part to play diplomatically in this. We can use our negotiating weight. “I think that our Government has international respect and this country has international respect in a way that Donald Trump doesn’t. I think we need to use that for the purposes of conflict resolution and for the purposes of making sure this doesn’t escalate out of control.”

On Saturday, Mr Hunt said Iran’s actions raised “very serious questions” about the security of British and international shipping in the Strait of Hormuz. He told reporters that, having spoken to his Iranian counterpart Mohammad Javad Zarif, Tehran saw the situation as a “tit for tat” following the detention of Grace 1 in Gibraltar.

“Nothing could be further from the truth,” he said.

Mr Hunt said MPs would be updated about what “further measures” the Government will take on Monday, adding that the threat level had been raised to three. “Our priority continues to be to find a way to de-escalate the situation. “That’s why I reached out to the Iranian foreign minister, that’s why due process in Gibraltar continues. “We need to see due process happening in Iran as well, we need to see the illegal seizing of a British flagged vessel reversed, we need that ship released, and we continue to be very concerned about the safety and welfare of the 23 crew members.”

Iran has directly linked the seizure of the vessel with Britain’s role in detaining a tanker carrying Iranian oil earlier this month. A spokesman for Iran’s Guardian Council was quoted as saying “the rule of reciprocal action is well known in international law” and that Tehran made the right decision in the face of an “illegitimate economic war and seizure of oil tankers”.

The explanation, which contrasts with a suggestion on Friday night that the Stena Impero was “violating international maritime rules” and had collided with a fishing boat, came as the UK Government warned British ships to stay away from the Strait of Hormuz.

A second oil tanker, the Liberian-flagged Mesdar, which is managed by Norbulk Shipping UK, veered off course towards the Iranian coast after it was boarded by armed guards at about 5.30pm on Friday. Communication with the ship was later re-established and the crew were unharmed. The tanker was reportedly allowed to resume navigation.

France and Germany joined condemnation of Iran’s actions, which have triggered concerns that it will lead to further oil price hikes amid heightened tensions in the Gulf involving Iran, the US and UK.

Mr Afifipour said the seized tanker “risked maritime safety” in the Strait of Hormuz, through which almost a fifth of the world’s annual oil consumption passes.

“We are required by regulations to investigate the issue ... the duration of the investigation depends on the level of cooperation by the involved parties,” he said.

The seizure has heightened tension between Iran and Britain, which is a party to Iran’s 2015 multinational nuclear deal. The Daily Telegraph newspaper reported on Saturday that London was planning to target Iran with sanctions in the aftermath of the tanker seizure.

In a letter to the UN Security Council, Britain said the tanker was approached by Iranian forces in Omani territorial waters where it was exercising its lawful right of passage, and that the action “constitutes illegal interference.”

Stena Bulk, the vessel’s Sweden-based owners, said it is preparing a formal request to visit the crew, who are from India, Latvia, the Philippines and Russia. India has called on Iran to release the 18 Indian crew members.

Tehran for weeks has vowed to retaliate for the seizure by Royal Marines of the tanker Grace 1 carrying Iranian oil near Gibraltar on July 4 which was suspected of violating sanctions on Syria.

US President Donald Trump pulled the United States out of the nuclear agreement with Iran last year and reimposed and tightened sanctions on Iran’s oil and banking sectors.

Iran has repeatedly threatened to close the Strait of Hormuz if it cannot export its oil because of the sanctions but cannot legally do so as part of the waterway is in Oman’s territorial waters.

Ships using the Strait also pass through Iranian waters, which are under the responsibility of Iran’s Revolutionary Guards Navy.

“Iran is displaying its power without entering a military confrontation. This is the result of America’s mounting pressure on Iran,” said an Iranian official, who asked not to be identified.

1 Coronavirus: No new Covid-19 deaths reported in State for first time since March
2 Tributes paid to Ireland’s deputy ambassador to China who died on Sunday
3 Coronavirus: What will reopen in Ireland’s phases to ease restrictions and what are the dates?
4 Unidentified man has been in Irish psychiatric hospital for 30 years
5 Dominic Cummings defends 400km journey and says he never considered resigning
Real news has value SUBSCRIBE